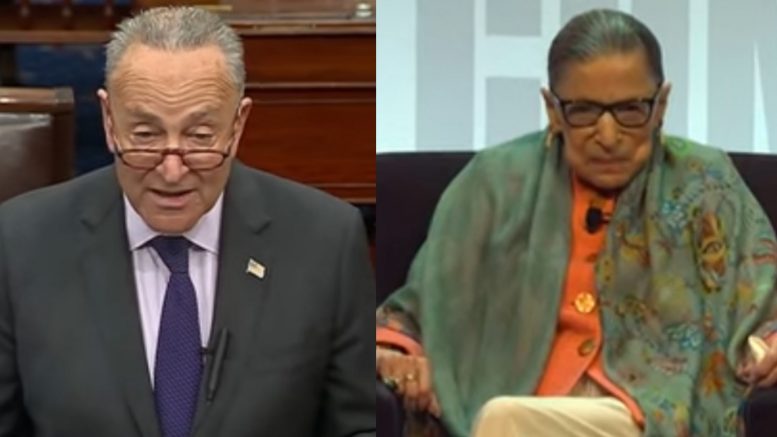 Ginsburg died Friday at the age of 87 from complications surrounding metastatic pancreas cancer.

The late Supreme Court Justice, who spent more than two decades on the bench in the highest court of the land, is survived by her two children, Jane Carol and James Steven Ginsburg, according to Fox News.

It is almost certain that Ginsburg’s death will lead to a political showdown on Capitol Hill, as it comes less than two months before the 2020 election.

Republicans hold the majority in the Senate and could legally nominate and even confirm a replacement for Ginsburg before the end of President Trump’s first term.

Following the announcement of Ginsburg dying, Sen. Chuck Schumer immediately tweeted, “The American people should have a voice in the selection of their next Supreme Court Justice. Therefore, this vacancy should not be filled until we have a new president.”

Just moments later and after showing no sympathy to the passing of the Supreme Court Justice, Schumer tweeted, “Tonight we mourn the passing of a giant in American history, a champion for justice, a trailblazer for women.”

“She would want us all to fight as hard as we can to preserve her legacy,” he added.

Ryan Saavedra of the Daily Wire noticed the shallowness of Schumer’s public responses and called him out on it. See Below

Notice which of these tweets came first pic.twitter.com/r85tSEHd2N

In ending, here is comedian Tim Young’s response to Schumer’s order of statements:

Political statement on RBG's passing FIRST before condolences… what a class act you are.