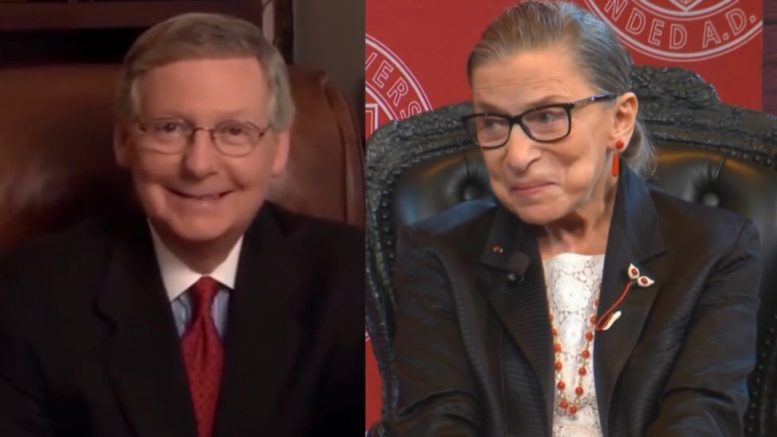 “The Senate and the nation mourn the passing of Justice Ruth Bader Ginsburg and the conclusion of her extraordinary American life,” McConnell stated.

In his statement, Senator Mitch McConnell vowed that Republicans will move to fill the Supreme Court vacancy after Justice Ginsburg’s passing.

“Americans reelected our majority in 2016 and expanded it in 2018 because we pledged to work with President Trump and support his agenda, particularly his outstanding appointments to the federal judiciary. Once again, we will keep our promise,” the Senate Majority leader said in part.

“President Trump’s nominee will receive a vote on the floor of the United States Senate,” McConnell added.

The decision sets up a fierce election-year battle, where McConnell will need to hold together at least 50 of his 53-member caucus to fill the seat, which would let Vice President Pence cast a tie-breaking vote, as reported by The Hill. Continued Below

The Senate and the nation mourn the passing of Justice Ruth Bader Ginsburg and the conclusion of her extraordinary American life.

President Trump last week, announced 20 new candidates to his list of potential Supreme Court Justices who would likely determine the future of the court and the country.

Speaking from the Diplomatic Reception room of the White House, the president read off a list of names including Republican Senators Ted Cruz of Texas, Tom Cotton of Arkansas and Josh Hawley of Missouri.