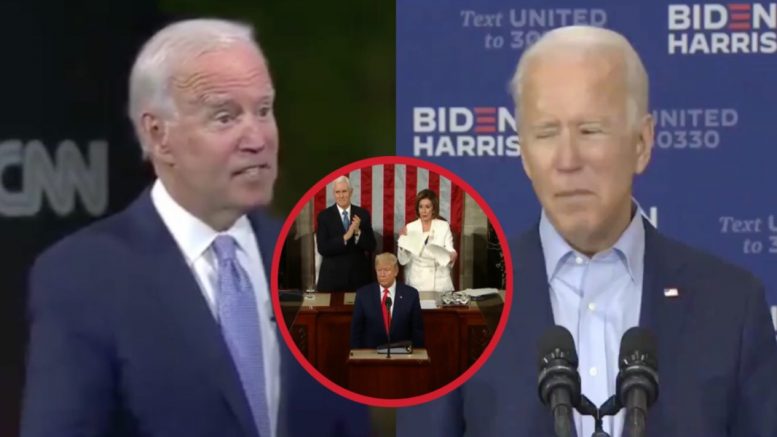 “Imagine had he at the State of the Union stood up and said… ‘We’ve got a pandemic– we’ve got a real problem’– imagine if he had said something. How many more people would be alive?” Biden claimed during a CNN town hall Thursday.

“We are coordinating with the Chinese government and working closely together on the coronavirus outbreak in China. My administration will take all necessary steps to safeguard our citizens from this threat,” the president added.

As White House transcripts indicate, the president mentioned the novel coronavirus in passing while discussing his administration’s health policy. In his remarks, the commander-in-chief not only asserted that combatting the virus was essential to public health, but also promised that his White House would take all the “necessary steps to safeguard” the public from the outbreak, Breitbart noted. Video Below

WATCH: Joe Biden lies and claims President Trump didn't mention the coronavirus during his State of the Union address on February 4, 2020.

Friday in Hermantown, Minnesota, Joe Biden again falsely claimed, “Imagine if he had just, maybe on the State of the Union of that year, spoke up and said ‘we’ve got a problem, but we can handle, here’s what we got to do’”.

Joe Biden again falsely claims that President Trump did not mention the coronavirus during the State of the Unionhttps://t.co/lnrKBgRL7j pic.twitter.com/HomB2qgVQO

Meanwhile, Joe Biden on February 28, said: “It’s not a time to panic about the coronavirus.”

Joe Biden on February 28: "It's not a time to panic about coronavirus" pic.twitter.com/y5ZLeAFRal

On January 31, 2020, the Commander in Chief issued an Executive Order to “restrict and suspend the entry into the United States, as immigrants or nonimmigrants, of all aliens who were physically present within the People’s Republic of China, excluding the Special Administrative Regions of Hong Kong and Macau”.

Within hours of President Trump’s decision to restrict travel from China, top Democrats and media figures immediately derided the move as unnecessary and xenophobic.

Democratic presidential nominee Joe Biden quickly attacked what he called Trump’s “record of hysteria, xenophobia and fear-mongering” after the travel restrictions were announced, and argued that President Trump “is the worst possible person to lead our country through a global health emergency.”

We are in the midst of a crisis with the coronavirus. We need to lead the way with science — not Donald Trump’s record of hysteria, xenophobia, and fear-mongering. He is the worst possible person to lead our country through a global health emergency.

After President Trump implemented his travel ban from China on January 31, Joe Biden said in Iowa “this is no time for Donald Trump’s record of hysterical xenophobia and fear-mongering.” pic.twitter.com/gru4jsiCVf

(Related: Joe Biden: “The Only Person Calling To Defund The Police Is Donald Trump… He’s Pathological”)