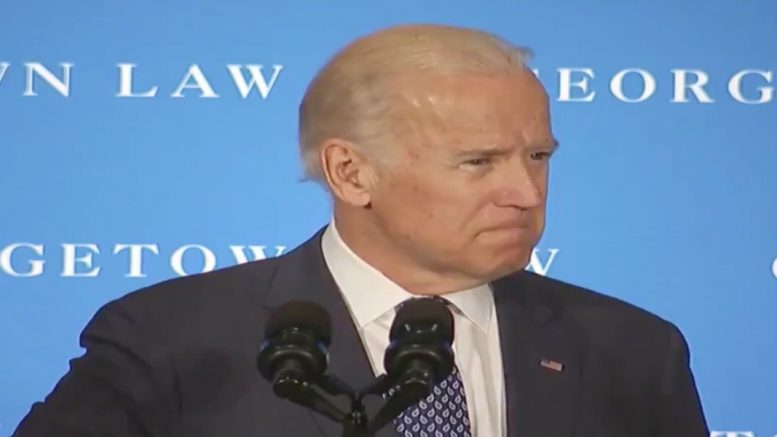 Democratic presidential nominee Joe Biden said on Friday that whoever wins November’s presidential election should be the person to nominate the next seat to the Supreme Court Justice after the passing of Ruth Bader Ginsburg.

Let me be clear: The voters should pick a President, and that President should select a successor to Justice Ginsburg.

Meanwhile, a video resurfaced on social media of Joe Biden, urging the Senate in 2016 to take up a vote on the Supreme Court nominee Merrick Garland to fill the vacancy created by the death of Justice Antonin Scalia.

Joe Biden had declared that if he were chairman of the Senate Judiciary Committee he would push ahead with the nomination of a Supreme Court justice “even a few months before a presidential election.”

“I would go forward with a confirmation process as chairman, even a few months before a presidential election, if the nominee were chosen with the advice and not merely the consent of the Senate, just as the Constitution requires,” the former vice president stated. Video Below

Joe Biden in 2016: "I would go forward with a confirmation process as chairman, *even a few months before a presidential election,* if the nominee were chosen with the advice, and not merely the consent, of the Senate, just as the Constitution requires.pic.twitter.com/eAdrDigc8S

Senate Majority Leader Mitch McConnell cited a so-called “Biden rule” as justification for delaying Merrick Garland’s nomination, pointing to a 1992 Biden speech that demanded President Bush wait until after that year’s election to appoint a Supreme Court replacement, per Newsweek.

“I know there is an argument that no nominee should be voted on in the last year of a presidency. But there is nothing in the Constitution– or our history– to support this view,” Biden wrote in March 2016, demanding Senate Republicans review Garland’s nomination. Continued Below

“Americans re-elected our majority in 2016 and expanded it in 2018 because we pledged to work with President Trump and support his agenda, particularly his outstanding appointments to the federal judiciary,” Senator McConnell said. “Once again, we will keep our promise. President Trump’s nominee will receive a vote on the floor of the United States Senate.”

The decision sets up a fierce election-year battle, where McConnell will need to hold together at least 50 of his 53-member caucus to fill the seat, which would let Vice President Pence cast a tie-breaking vote, as reported by The Hill.

On Saturday, President Donald Trump issued a message directed towards Republicans, signaling he is ready to move forward on the process of selecting a Supreme Court Justice to replace Ruth Bader Ginsburg.

.@GOP We were put in this position of power and importance to make decisions for the people who so proudly elected us, the most important of which has long been considered to be the selection of United States Supreme Court Justices. We have this obligation, without delay!