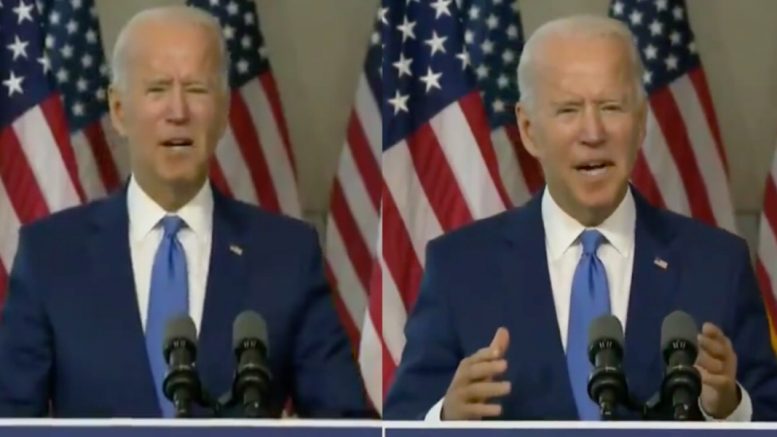 Democratic presidential nominee Joe Biden gave remarks Sunday at the National Constitution Center from Philadelphia and indicated that he will not be releasing a list of possible Supreme Court nominees, despite growing pressure to do so.

Biden’s remarks come after the death of Justice Ruth Bader Ginsburg on Friday and has left a vacancy on the high court, however, Senate Majority Leader Mitch McConnell vowed that Republicans will move to fill the Supreme Court opening.

Joe Biden stepped to the podium to give his remarks, appearing somewhat unwell on Saturday.

Watch as Biden struggles to find his words until he’s able to latch on to the teleprompter.

This is after he took off all of yesterday and half of today. He read for 15 minutes before exiting, taking no questions. pic.twitter.com/tecd25WSZv

“That includes this whole list of potential nominees that I would put forward. … They said after Ruth Bader Ginsburg passed away, they said Biden should release his list. It’s no wonder the Trump campaign asked that I release the list, only after she passed away,” Biden falsely said. “It’s a game for them. It’s a play to gin up emotions and anger.

He also said that President Trump is the only presidential candidate to release possible nominees to the high court and indicated why he will not release his list of possible Supreme Court nominees. “First, putting a judge’s name on a list like that could influence that person’s decision making as a judge, and that would be wrong, or at least create the perception that it would have influence,” Biden said. Continued Below

“Second, anyone put on a list like that under these circumstances would be subject to unrelenting political attacks, because any nominee I would select would not get a hearing until 2021 at the earliest. She would endure those attacks for months on end without being able to defend herself,” he alleged.

In June, Biden seemed committed to releasing a shortlist of Black women he would consider as potential Supreme Court nominees ahead of November’s general election. “We are putting together a list of a group of African American women who are qualified and have the experience to be on the court,” Biden told reporters in Wilmington, Delaware.

Joe Biden says he won’t release a SCOTUS shortlist ahead of 2020.

He adds that his “first choice for the Supreme Court will make history as the first African American woman justice, but I will consult with senators of both parties about that name.” https://t.co/IMtbrfEqhG pic.twitter.com/GCsrJP30b5

Less than 3 months ago, Joe Biden said he was vetting people and putting together a list of his potential nominees for the Supreme Court.

Today he went back on his pledge to release his list. What is Biden hiding? pic.twitter.com/yB13DFfPGL

On September 9, the Trump campaign released a list of twenty additional names and called on Joe Biden to release his own list of prospective nominees.

During a rally in June, the Commander in Chief said that “Biden can’t release his list because the names would be too extreme, too radical”.

"I'll be soon announcing a new list of exceptional candidates for the United States Supreme Court….Biden can't release his list because the names would be too extreme, too radical." pic.twitter.com/bPFBLm2LYK

Meanwhile on Sunday, Joe Biden also claimed, “If Donald Trump has his way, the complications from COVID-19, which are well beyond what they should be– it’s estimated that hat 200 million people have died, probably by the time I finish this talk.”

Joe Biden claims “it is estimated that 200 million people have died” from COVID-19https://t.co/Z95ODUGfmG pic.twitter.com/PMmW1PHSZm