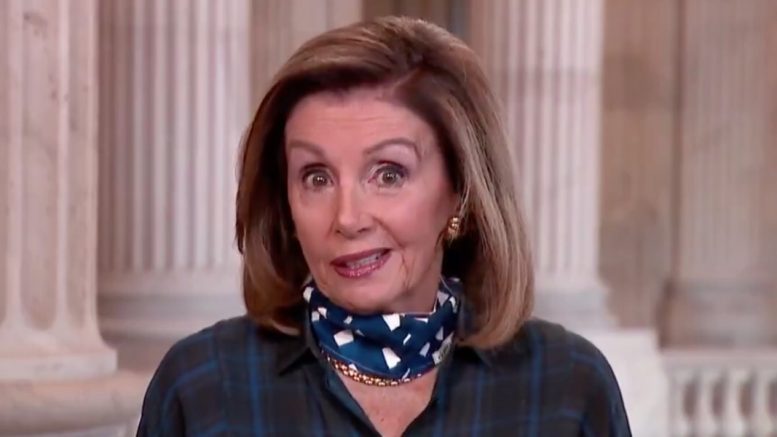 During a Sunday interview on ABC News’ “This Week,” House Speaker Nancy Pelosi (D-CA) did not rule out “impeachment” as an option to halt the Commander in Chief’s U.S. Supreme Court pick from being confirmed, saying Democrats have “options” and will “use every arrow in our quiver” to block the eventual nominee before the November election.

Senate Majority Leader Mitch McConnell (R-KY) issued a statement on Friday evening following the death of Justice Ruth Bader Ginsburg, and vowed that Republicans will move to fill the Supreme Court vacancy. “President Trump’s nominee will receive a vote on the floor of the United States Senate,” McConnell said.

“What can you do then?” George Stephanopoulos asked Nancy. “Some have mentioned the possibility if they try to push through a nominee in a lame duck session that you and the House could move to impeach President Trump or Attorney General William Barr as a way of stalling and preventing the Senate from acting on this nomination.”

“We have our options. We have arrows in our quiver that I’m not about to discuss right now, but the fact is we have a big challenge in our country,” Pelosi claimed. “This president has threatened to not even accept the results of the election with statements he and henchmen have made.”

She added: “So right now, our main goal…  would be to protect the integrity of the election as we protect the people from the coronavirus.”

When pressed again on whether she would employ impeachment tactics, Pelosi randomly responded, “Good morning– Sunday morning.” Continued Below

Rep. Steve Cohen (D-TN) also introduced a resolution in June, calling for the impeachment of Barr amid John Durham’s investigation. The resolution has 35 Democrat co-sponsors. Video Below