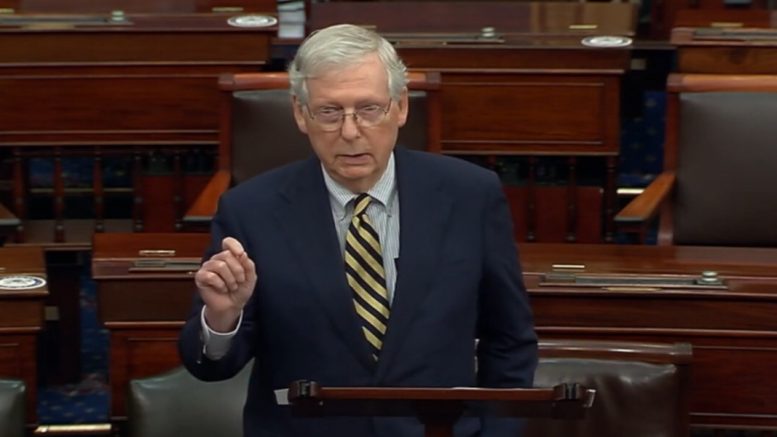 “Now already, some of the same individuals who tried every conceivable dirty trick to obstruct Justice Gorsuch and Justice Kavanaugh are lining up … to proclaim the third time will be the charm,” the Kentucky Senator noted.

“The American people are about to witness an astonishing parade of misrepresentations about the past, misstatements about the present, and more threats against our intuitions from the same people … who have already been saying for months well before this… they want to pack the court,” Senator McConnell explained.

“Two years ago, a radical movement tried to use unproven accusations to ruin a man’s life because they could not win a vote fair and square. Now they appear to be readying even more appalling sequel,” he continued. “This time, the target will not just be the presumption on innocence for one American, but our very governing institutions themselves.”

“We are already hearing incorrect claims that there is not sufficient time to examine and confirm a nominee. We can debunk this myth in about 30 seconds. As of today, there are 43 days until November 3rd and 104 days until the end of this Congress. … The Senate has more than sufficient time to process a nomination. History and process make that perfectly clear,” Senator McConnell said, rebuking claims from Democrats that a Supreme Court vacancy couldn’t be filled in such a short period of time, noting that Ginsburg’s nomination was filled in just 42 days. Continued Below

“The American people re-elected our majority in 2016 and strengthened it further in 2018 because we pledged to work with President Trump on the most critical issues facing our country. The federal judiciary was right at the top of that list,” Senator McConnell explained.

“… Perhaps more than any other single issue, the American people strengthened this Senate majority to keep confirming this President’s impressive judicial nominees who respect our Constitution and understand the proper role of a judge,” he said.

“In 2018, the voters grew that majority on our pledge to continue working with President Trump, most especially on his outstanding judicial appointments. We are going to keep our word once again. We are going to vote on this nomination on this floor,” Senator McConnell vowed to the American people. Video Below

The Senate and the nation mourn the passing of Justice Ruth Bader Ginsburg and the conclusion of her extraordinary American life.

(Related: Cruz: SCOTUS Picks Have Been Made All 29 Times There Has Been A Vacancy In A Presidential Election Year)