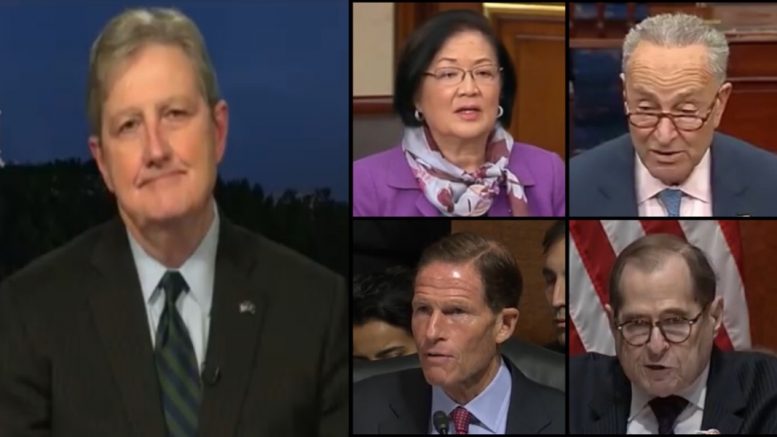 Senator John Kennedy (R-LA) who is a member of the Senate Judiciary Committee, spoke with Fox News’ Shannon Bream on Tuesday regarding the current vacancy at the Supreme Court after Justice Ruth Ginsburg’s passing.

“Let me make two points here. Number one: Senator Schumer, who has also talked about court-packing has been telling anyone who will listen that we should not fill this vacancy, because it’s an election year,” the Louisiana Senator said.

“The constitutional provisions on filling a Supreme Court vacancy are unaffected by an electoral calendar. And I want to make it clear, we are going forward,” Senator Kennedy stated.

“And anyone who thinks Senator Schumer would not do the same thing if the shoe were on the other foot, probably also believes Jimmy Hoffa died a natural death,” he expressed.

Jimmy Hoffa disappeared on July 30, 1975. He is believed to have been murdered by the Mafia and was declared legally dead in 1982, as reported by Wikipedia. Continued Below

“Shame on them!” Senator Kennedy declared. “They ought to hide their head in a bag. And that’s just further demonstration of the fact that they don’t understand the role of the United States Supreme Court. They think Justices are just politicians in robes.”

“They think Justices have the right to rewrite the Constitution every other Thursday to advance a political or social agenda that they can’t get by the voters. And that’s not what our founders set the the United States Supreme Court or any of our federal courts,” he noted.  Continued Below

Asked if the former vice president has an opportunity to “clearly state that he’s not with that section of this party” who wants to pack the court and filibuster, Senator Kennedy told Shannon Bream, “Yes. Vice President Biden needs to answer that question.”

“If he criticizes President Trump’s nominee for the Supreme Court, as I suspect he will, he needs to tell the America people who he would appoint. Like it not, the Supreme Court vacancy has become maybe the most important issue in this presidential race,” he said.

“And President Trump is shortly, I’m told, going to tell us where he stands. I think Vice President Biden needs to do the same thing. And he needs to either support or condemn his colleagues who have threatened to destroy the U.S. Supreme Court by packing it, by turning it into a bunch of politicians in robes– sort of a mini congress, if we don’t do what they want. And he needs to hit that one head on,” Senator Kennedy added. Video Below

The Constitution’s provisions for filling a #SCOTUS vacancy are unaffected by the electoral calendar.

We’re going forward, and anyone who thinks Sen. Schumer wouldn’t do the same thing if the shoe were on the other foot probably believes Jimmy Hoffa died a natural death. pic.twitter.com/qmHvtT76uF

Asked this week whether or not he favors Supreme Court packing , Biden failed to answer and blamed President Trump and the upcoming debates for why he refused to disclose his stance.

“Let me tell you why I’m not gonna answer that question. Because if we shift all of the focus — that’s what [Trump] wants. He never wants to talk about the issue at hand. He always tries to change the subject,” the former Vice President said.

Joe Biden on court packing: “I’m not going to answer that question”https://t.co/474yMypd1T pic.twitter.com/FZhkF8oJSq