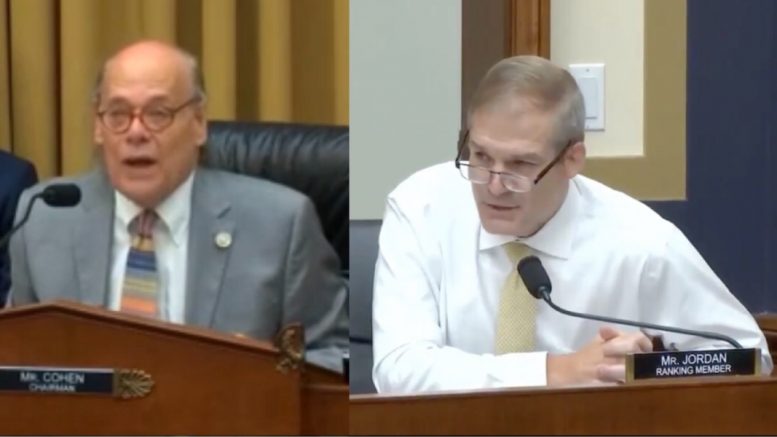 During a Thursday House Judiciary Subcommittee hearing on Oversight of the Civil Rights Division of the Department of Justice, Ranking Member Jim Jordan (R-OH) called out the chairman of the committee, Rep. Steve Cohen (D-TN), for refusing to condemn the mobs when Attorney General William Barr testified on July 28 before the House Judiciary Committee.

“What makes me concerned for the country is this is the first time in my memory that the leaders of the — one of our great political parties —  the Democratic Party are not coming out and condemning mob violence and the attack on federal courts. Why can’t we just say, ‘Violence on the federal courts has to stop?’” Attorney General Barr asked the committee in July. “Can we hear something like that?”

“The chairman of the subcommittee said the Attorney General is immature. What? This from a guy who brought a bucket of chicken to a hearing?” Rep. Jordan declared, before Chairman Steve Cohen slammed down his gavel.

“I did not say he was immature. I said a lot of things about him,” Cohen insisted of his opening remarks. “I did not.”

During his opening remarks, Cohen said of AG Barr, “In July when Attorney General Bill Barr acquiesce to appear before this committee, after refusing to do so over a year earlier, when he chickened out, because he didn’t want to have two attorney’s, Mr. Isen and cohort, question him. I asked with the assistance of my counsel on the committee– I asked Mr. Barr to send Assistant Attorney General Eric Dreiband– asked him to commit to sending him to testify before this hearing. He replied in a condescending tone, ‘I’ll talk to him about it’, and turned his head aside.”

“On August 28, the committee sent a formal invitation to … Dreiband to testify today,” Cohen said. “And on Monday, the latest pattern– the long standing pattern of complete obstruction, the Justice Department informed us that Mr. Dreiband would not be appearing for this hearing.”

“Worse yet, the excused provided was about as ‘immature’ and unsophisticated as saying, ‘The dog ate my homework’. Evidently the department feels we were too rough on Attorney General Barr. We hurt his feelings. We didn’t treat him with the respect that previous attorney generals deserved,” the Tennessee congressman added.

Rep. Jim Jordan called out Cohen, saying, “The chairman said the attorney general was condescending during the hearing two months ago. He was interrupted 70 times by the Democrats! Over 30 times they used the phrase, ‘Reclaiming my time’. Everyone saw the spectacle. … And you want to say he was condescending? You gotta be kidding me. No wonder the guy doesn’t want to come.” Video Below

“… All they want to do is lecture the attorney general– get mad at the Justice Department [be]cause they won’t send a witness after the way the attorney general was treated? The American people saw that hearing. They know how you guys treated him. 5 hours of it. And the guy who brings a bucket of chicken wants to condemn and critique the attorney general. You’ve got to be kidding me,” he expressed.

In May 2019, Rep. Cohen brought a glass chicken prop and a bucket of KFC fried chicken to a House Judiciary Committee after Attorney General Barr declined to appear for their circus show.

Here’s a few examples from the July hearing which Rep. Jordan was referring to:

How hapless are these Dems?pic.twitter.com/38e2NVSQIJ

Barr’s quiet demeanor and command of the issues threaten the Dems command of the narrative. So they didn’t let him talk. When he tried to answer their “questions,” which were prepared diatribes, they reacted as if he was interrupting them, saying, “reclaiming my time.” pic.twitter.com/thUcMwiABV