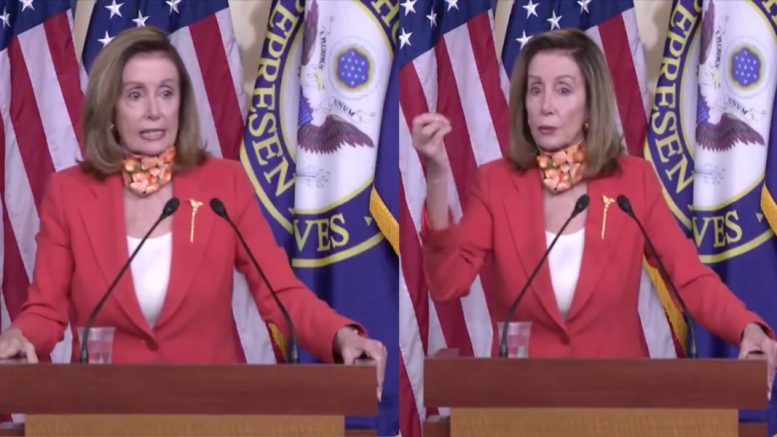 House Speaker Nancy Pelosi (D-CA) on Thursday, responded to remarks made by the Commander in Chief on Wednesday regarding a “peaceful transfer of power” after the election, in which the president told White House Playboy correspondent Brian Karem, “Well, we’re going to have to see what happens. You know that.”

JUST IN: Asked if he'd "commit to making sure that there is a peaceful transferral of power after the election," Pres. Trump says, "Well, we're going to have to see what happens." https://t.co/JsAo4rBy2e pic.twitter.com/8haEyDVsdx

On Thursday, Pelosi accused President Donald Trump of “trying to have the Constitution of the United States swallow Clorox.”

While addressing President Trump’s remarks to “wait and see”, she pivoted to reference his suggestion that doctors find an injectable process to “disinfect” the blood and eradicate coronavirus.

“I don’t know why the press doesn’t make more of this, to be very honest with you,” Pelosi told reporters. “I mean, if he says to people, swallow Clorox, we hear about it for the rest of our lives, but he’s trying to have the Constitution of the United States swallow Clorox– I appreciate these questions that all of you have this morning, and I guess provoked by the arrogance and the disregard for the Constitution of the president’s statement last night,” Pelosi claimed. Video Below

“He is trying to have the Constitution of the United States swallow Clorox.”

Asked of her plan if Trump won’t recognize a Biden victory, Pelosi says, she has "a pretty good idea of the method of his madness" and it's "stunning" how "complicit" GOP are. https://t.co/mRWa6yO6vC pic.twitter.com/RSJQj5qWWI

As reported by Daily Caller:

President Trump’s actual statement regarding the possibility of using a disinfectant to treat coronavirus came from an April 24 Coronavirus Task Force briefing.

“I see the disinfectant that knocks it out in a minute, one minute. And is there a way we can do something like that by injection inside or almost a cleaning?” Trump asked at the time. “As you see, it gets in the lungs, it does a tremendous number on the lungs, so it would be interesting to check that.”

Trump also asked whether there might be a way to treat the virus by passing ultraviolet light “through the skin,” ostensibly in the same way that phototherapy can be used to treat premature babies with jaundice.

(Related: Pelosi Says Dems Have ‘Options’ & ‘Arrows In Our Quiver’ If Trump Pushes SCOTUS Nomination Before The Election)