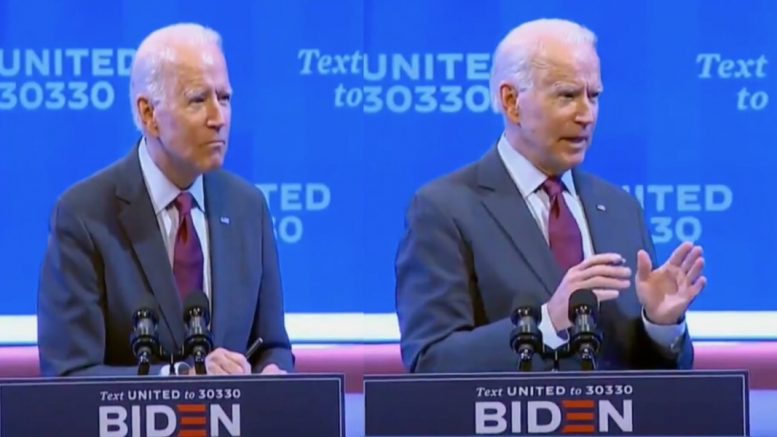 Democratic presidential nominee Joe Biden on Sunday, refused to say whether he would back expanding the Supreme Court to add more justices.

A reporter asked Biden his thoughts on Supreme Court packing, which has been threatened by some Democratic lawmakers, if Republicans move forward with confirming President Donald Trump’s nominee, Judge Amy Coney Barrett.

“I am not– and… I know you’re gonna be upset with my answer, but what I’m not gonna do is play the Trump game, which is a good game he plays– take your eye off the issue before us,” Biden claimed.

“If I were to say yes or no to that, that becomes a big issue,” he added. “That’s the headline here.”

Last week, Biden also declined to say whether he supports adding more members to the Supreme Court if Republicans fill a vacancy before the November 3 presidential election.

“It’s a legitimate question. But let me tell you why I’m not going to answer that question: Because it will shift all the focus. That’s what he wants,” Biden told WBAY, a local TV station in Green Bay, Wis., referring to President Trump. “He never wants to talk about the issue at hand. He always tries to change the subject.” Video Below

Joe Biden refuses to say whether he’d pack the court because his answer would become “a big issue”https://t.co/lebpOnxDh1 pic.twitter.com/CFWGkm0U7I

Last Sunday, Biden gave remarks at the National Constitution Center from Philadelphia and indicated that he will not be releasing a list of possible Supreme Court nominees, despite growing pressure to do so.

“First, putting a judge’s name on a list like that could influence that person’s decision making as a judge, and that would be wrong, or at least create the perception that it would have influence,” Biden said.

“Second, anyone put on a list like that under these circumstances would be subject to unrelenting political attacks, because any nominee I would select would not get a hearing until 2021 at the earliest. She would endure those attacks for months on end without being able to defend herself,” he alleged.

In June, Biden seemed committed to releasing a shortlist of Black women he would consider as potential Supreme Court nominees ahead of November’s general election. “We are putting together a list of a group of African American women who are qualified and have the experience to be on the court,” Biden told reporters in Wilmington, Delaware. Video Below

During a 2019 interview with NPR, the late Justice Ruth Bader Ginsburg made clear she does not support court-packing; expanding the number of Justices.

“Nine seems to be a good number. It’s been that way for a long time,” Ginsburg said. “I think it was a bad idea when President Franklin Roosevelt tried to pack the court.”

“Well, if anything would make the court appear partisan, it would be that,” she added. “One side saying, ‘When we’re in power, we’re going to enlarge the number of judges, so we would have more people who will vote the way we want them to.'”