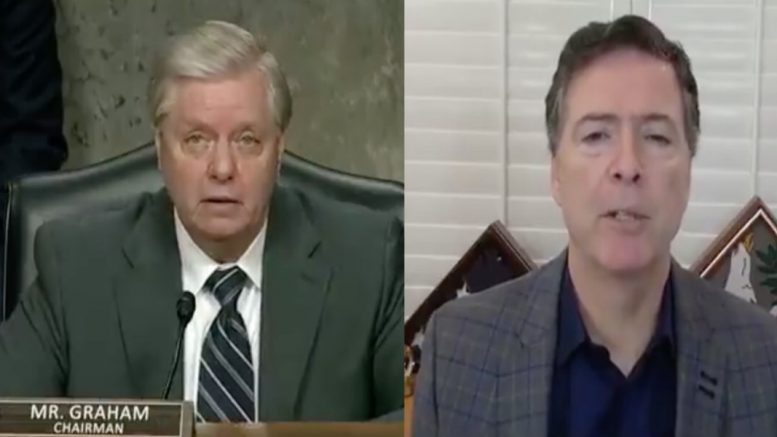 During a Senate Judiciary Committee hearing Wednesday on  “Oversight of the Crossfire Hurricane Investigation,” former FBI Director James Comey admitted that he would not have signed the warrant applications against former Trump campaign adviser Carter Page– knowing then what he knows now.

Chairman Lindsey Graham (R-SC) asked Comey, “Knowing then what you know now about all the things that we’ve come to find, would you still sign the warrant application against Carter Page in October, January, and April?”

“No, I would want a much more complete understanding…” James Comey said.

GRAHAM: "Knowing then what you know now — would you still have signed the warrant application against Carter Page?"

COMEY: "No, I would have wanted a much more complete understanding…" pic.twitter.com/IPNSGNCCOk

In June, former Deputy Attorney General Rod Rosenstein testified before the Senate Judiciary Committee and admitted that he would not have signed the fourth application renewing the FBI’s surveillance of former Trump campaign adviser Carter Page.

Rosenstein was asked by committee chairman Lindsey Graham if he knew in June 2017 what he knows now, would he have signed that final application to wiretap Page? Rosenstein replied that he would not have. In late 2019, a Justice Department watchdog identified several “inaccuracies and omissions” in the FISA applications submitted by the FBI.

The former former deputy attorney general also admitted that he would not have appointed Robert Mueller to conduct his investigation based on all facts which have surfaced since the probe. Continued Below

In August, former acting attorney general Sally Yates also admitted that she wouldn’t have signed a FISA warrant application to spy on Carter Page if she had known what she knows now about the phony Steele Dossier, which was a key component used for the application.

Without the dossier, there would be no FISA warrant– something the FBI knew and failed to tell the court, according to the Horowitz report.

Horowitz in December, told the committee regarding Democrats who funded the dossier: “On the FBI side, as we layout in the report, it’s page 258 forward– there were a number of people who knew. It’s challenging… to know precisely what was known at the very highest levels of the FBI and when– the deputy director levels, because of the lack of direct record of entire briefings.”