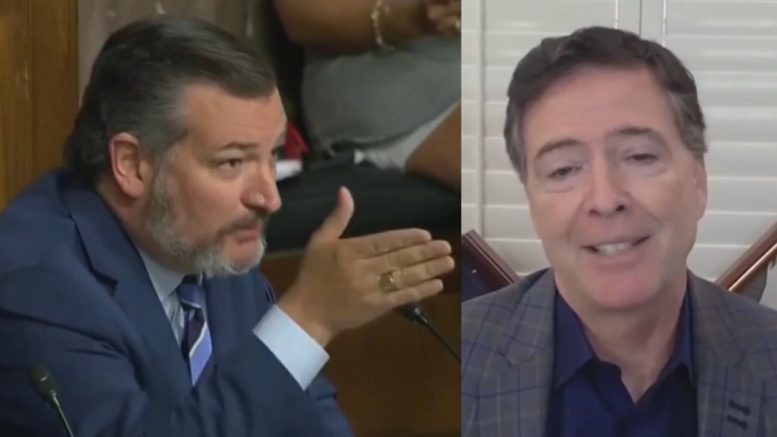 During a Senate Judiciary Committee hearing Wednesday on “Oversight of the Crossfire Hurricane Investigation,” Senator Ted Cruz (R-TX) ripped James Comey during his grilling session and implied that the former FBI director was “deliberately corrupt”.

“This investigation into the president was corrupt,” Sen Cruz told Comey. “The FBI and the Department of Justice were politicized and weaponized. And in my opinion, there are only two possibilities: that you were deliberately corrupt or woefully incompetent. And I don’t believe you were incompetent. This had done severe damage to the professionals and the honorable men and women at the FBI, because law enforcement should not be used as a political weapon.”

“And that is the legacy you have left,” Senator Ted Cruz directly told James Comey.

James Comey deliberately politicized and weaponized the FBI to target the Obama-Biden administration’s political opponent, then-candidate Trump. That was wrong. His corruption has caused severe damage to the honorable men and women at the FBI and will be his legacy. pic.twitter.com/5CDnuZSh39

James Comey appeared before the committee to answer questions regarding his conduct and the conduct of other FBI officials during the investigation into the Trump campaign’s alleged ties to Russia. The investigation was launched in 2016 and heavily relied on the unverified and salacious Steele dossier to obtain FISA warrants against former Trump campaign advisor Carter Page, Department of Justice Inspector General Michael Horowitz found.

The FBI operation, “Crossfire Hurricane,” was launched and proceeded forward on unreliable grounds as the inspector general found 17 “significant errors” in FBI requests to federal courts for warrants to spy on the Trump campaign under the Foreign Intelligence Surveillance Act (FISA).

Earlier in his questioning, Senator Cruz cited the Horowitz report and accused the FBI of purposefully lying to the FISA courts. The Texas senator recounted one of the 17 “significant errors” in which Kevin Clinesmith, a former FBI lawyer, reportedly altered an email about Carter Page to say that he was “not a source” for another government agency. Video Below

Carter Page, however, was a source for the CIA. The DOJ relied on that Clinesmith’s assertion as it submitted a third and final renewal application in 2017 to eavesdrop on Page under the Foreign Intelligence Surveillance Act.

(Related: Graham To Comey: “Knowing Then What You Know Now… Would You Still Sign The Warrant Application Against Carter Page In Oct, Jan & April?”)