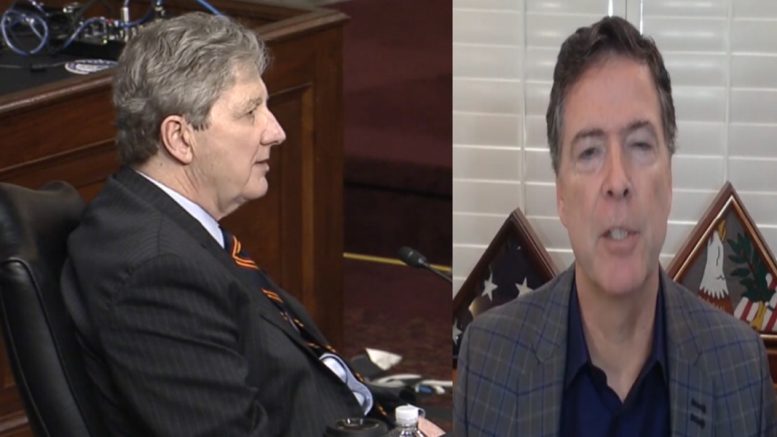 During a Senate Judiciary Committee hearing Wednesday on “Oversight of the Crossfire Hurricane Investigation,” Senator John Kennedy (R-LA) called Comey an “equal opportunity egotist” for his public roles in managing both the Trump inquiry and the Hillary Clinton email investigation, that was briefly re-opened in the days before the 2016 election.

James Comey appeared before the committee to answer questions regarding his conduct and the conduct of other FBI officials during the investigation into the Trump campaign’s alleged ties to Russia. Crossfire Hurricane was launched in 2016 and heavily relied on the unverified and salacious Steele dossier to obtain FISA warrants against former Trump campaign advisor Carter Page, Department of Justice Inspector General Michael Horowitz found.

“I do not. I enjoy attention from my family. I do not enjoy being recognized in public in my B-list celebrity fame, which I hope will go away very soon,” Comey replied.

“Well, I’ll give you this: You have been an equal opportunity egotist. You have tried to screw both Trump and Clinton,” the Louisiana Senator said.

He clarified, “Let’s talk about Clinton first. When you were head of the FBI, you investigated Secretary Clinton and her emails and her server, did you not?” which prompted Comey to respond, “The FBI team did while I was director, yes”. Continued Below

“And you concluded that there was no criminal violations, did you not?” asked Kennedy, which Comey said, “There were no violations that a reasonable prosecutor would pursue.”

“But you didn’t just issue a statement,” Senator Kennedy told Comey. “You called a press conference, and you commented on her behavior. You said she was ‘extremely careless’, but in your opinion there was no criminal intent. What were you thinking of? I mean, this is the Democratic nominee for president of the United States. Didn’t you realize that could have an impact on the election?”

Comey said, “Potentially, sure. I was trying to offer transparency about the justification for ending investigation of intense interest to the American people in July 5, 2016.” Continued Below

Senator Kennedy told Comey that he “gave us a full dose of transparency 11 days before the election” adding, “You sent a letter to congress saying, ‘Oh, never mind what I said in my press conference. I’m gonna reopen the investigation’, didn’t you? … And then, a few days later right before the election you said, ‘Never mind. She didn’t do anything.’ … We’re not talking about a parking ticket here. We’re talking about Democratic nominee for president of the United States. … And you didn’t think that would have an impact on the election?”

Comey told Senator Kennedy that it “could potentially have an impact no matter what we did”, which prompted the Louisanna Senator to ask, “And you don’t like attention?”

“Yes, both of those things are true at the same time. Sometimes you have to make hard decisions, and you don’t like attention,” Comey said.

(Related: Sen. Cruz Rips James Comey During His Grilling Session, Implies That He Was “Deliberately Corrupt”)