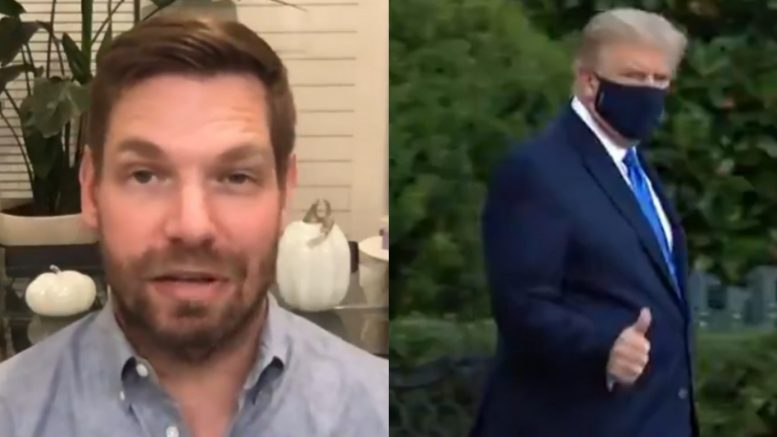 Rep. Eric Swalwell floated the possibility of “utilizing the line of succession” in wake of President Donald Trump testing positive for the coronavirus.

The Democrat congressman suggested that America’s “enemies” are watching very closely right now and it is highly important that President Trump demonstrates that he is “healthy and able” to perform his duties on a day-to-day basis. And if he can’t, then power should be transferred to a successor until the President is healthy.

As reported by USA Today, “Under the 25th Amendment, the president could notify House Speaker Nancy Pelosi, D-Calif., and the Senate majority’s senior member, Sen. Charles Grassley, R-Iowa, that he is unable to function, transferring power to Vice President Mike Pence until the president indicates that he is able to return.”

“We face many threats across the world, not just from other nation states but from cyber actors and individual actors who would want to bring us harm,” Swalwell told MSNBC’s Joy Reid.

“So it’s very important that as long as the President is able to project that he is in command and control, he should do that even if it’s virtually,” he continued. “He should do that every single day because the second an adversary believes that there’s an issue with command and control inside the United States, they may seek to use that as an opportunity to strike against us, whether it’s an ally of ours or a U.S. persons abroad, or even, God forbid, U.S. persons here.”

“If the President is healthy and able, I think every day demonstrating that is a good thing. If he’s not then utilizing the line of succession, even temporarily, is also important because, I promise you, our enemies are watching,” Swalwell declared. Video Below

"We face many threats across the world," Rep. Swalwell says, discussing impact of president's positive Covid-19 test on national security. "It's very important that as long as the president is able to project that he is in command and control he should do that" pic.twitter.com/9Z3AYQGGup

Since announcing his positive coronavirus test, President Trump posted a video on Friday that shows him appearing to be in good health as he thanked Americans for their warm thoughts and prayers.

Trump has managed to continue his presidential duties after being admitted to Walter Reed Military Medical Center “out of an abundance of caution.” So for now, the line of succession that Swalwell referenced is, at this point, highly unlikely from being considered.

“President Trump remains in good spirts, has mild symptoms, and has been working throughout the day,” press secretary Kayleigh McEnany said in a statement to reporters at the White House. “Out of an abundance of caution, and at the recommendation of his physician and medical experts, the President will be working from the presidential offices at Walter Reed for the next few days. President Trump appreciates the outpouring of support for both he and the First Lady.”