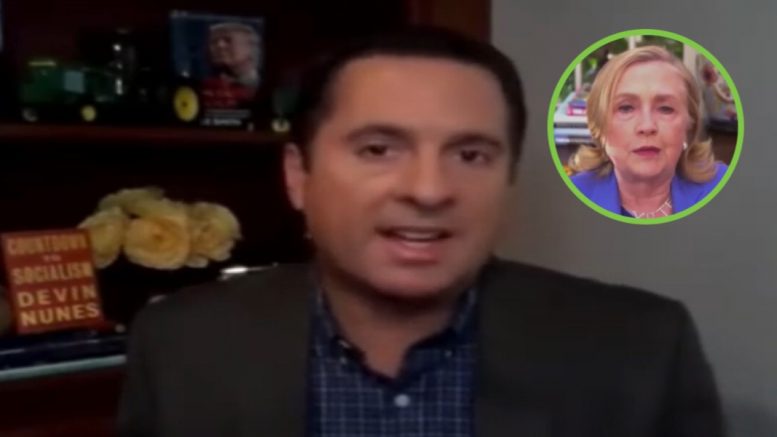 The declassified memo appears to show that the Russia hoax was reportedly twice failed presidential candidate Hillary Clinton’s plan, and the Obama-Biden White House was also reportedly briefed on it by former CIA Director John Brennan.

On July 26, 2016, U.S. intel authorities learned that Russian intel knew of Hillary Clinton’s plans to concoct a scandal alleging that Trump was working with Russia. Obama was personally briefed on Russia’s knowledge of Clinton’s plans:

Rep. Devin Nunes said that the FBI knew that “the Clinton campaign had created all of this because they knew the 33K emails were out there somewhere”.

“They knew that [former Utah Rep.] Jason Chaffetz and House Republicans were trying to find those emails. So what did they do? They created a sick fantasy– this was the Clinton campaign. I want you to remember this: the Clinton campaign created this sick fantasy. Then they went out and hired avatars to do it. So they hired a former British spy named [Christopher] Steele who did the Steele dossier[s],” the California Congressman said. Continued Below

“Then they hired a this suspected Russian spy, okay, so they could give it a veneer of being a Russian,” he explained, referring to the dossier’s “Primary Sub-Source,”– Russian national Igor Danchenko, who was publicly confirmed in late July 2020 after FBI summaries of his conversations with the FBI in early 2017 were declassified and publicly released. The FBI had previously investigated Danchenko to determine whether he was a formal Russian intelligence agent and had characterized him as a potential threat to national security.

“So imagine that. Now you have the Democrats hiring Russian spies– getting 3.5 million dollars from Moscow, and nobody in the media seems to give a damn about it,” Rep. Nunes said, while also pointing to documents cited in a report issued by the Republican majority on the Senate Finance and Homeland Security committees, which reported Hunter Biden and his business partner Devon Archer had a financial relationship with Elena Baturina, the widow of a man who had been mayor of Moscow until 2010.

“Every Republican Senator and Congress should be saying, ‘This is over. We want every damn bit of evidence that every intelligence agency has, or it’s maybe time to shut those agencies down,'” Rep. Nunes declared.

“Because at the end of the day, our liberties are more important than anything else we have in this country, and they have been stampeded over by these dirty cops and the Democratic Party and the media who fails to report on it,” he added.

We leave you with Rep. Nunes destroying Adam Schiff over the Russian hoax this week:

SAVAGE! Devin Nunes welcomes you to Schiff's "impeachment committee," and in 6 minutes, destroys EVERY losing strategy and lie that Schiff has pushed… pic.twitter.com/rQVTS0Nwk4

(Related: Rep. Nunes On Steele’s Sub-Source For Dossier: ‘We’ve Expanded Our Investigation Into The Brookings Institute”)