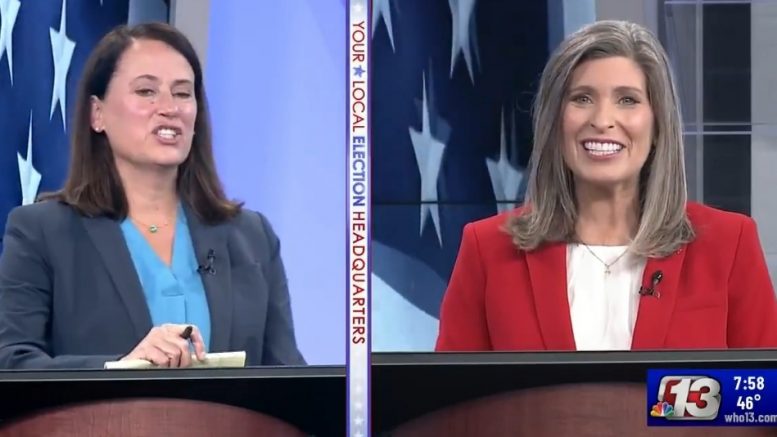 At one point, Ernst called out Greenfield over her failed business record and failed 2018 House campaign, which ultimately led to her staffer being charged with felony election misconduct and 13 counts of tampering with records.

Greenfield struggled to contain herself as Sen. Ernst exposed her past.

“So here is Mrs. Greenfield, who has been sued many times for shoddy workmanship, inferior materials in her businesses. She’s been sued for breach of contract,” Sen. Ernst pointed out.

“She is a handpicked candidate from Nancy Pelosi two years ago, when she couldn’t make it on the ballot because of felony election fraud,” the senator continued. “She is someone who filed for bankruptcy, sticking it to Iowa businesses to the tune of 29 million dollars.”

Greenfield tried to interrupt, accusing Ernst of being “dishonest.” However, Sen. Ernst fired back and said, “You can go on to the internet. You can see all of the documents. The documents are there, folks. Why would we take someone that has this record of dishonesty and failed business record.” Video Below

Theresa Greenfield melts down on camera when Joni Ernst shreds her failed business record and failed ‘18 House campaign where her top staffer end up with felony charges #iasen pic.twitter.com/rMezuvk5NP

This is how Republicans are learning from Trump that you win by going savage on the Democrats. So enjoyable to watch! https://t.co/gXceEXxb0F