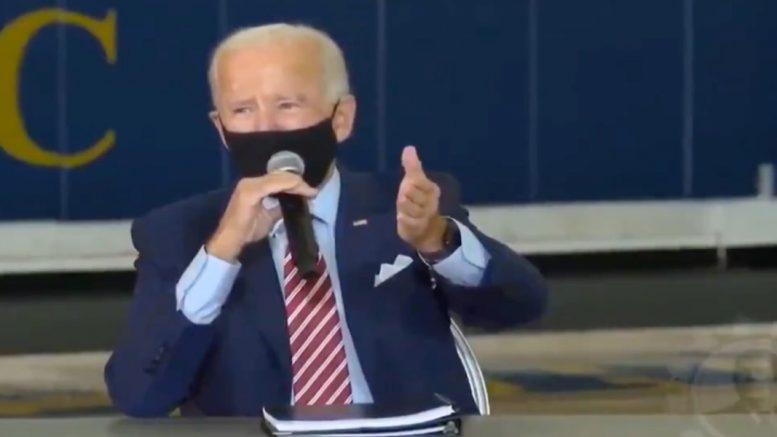 A video which has surfaced on social media this week, shows Democratic presidential nominee Joe Biden suggesting people’s ability to stay home during the coronavirus pandemic happened because “some Black woman was able to stock the grocery store shelf.”

“The American public, the blinders have been taken off. They’ve all of a sudden seen a helluva lot clearer,” Biden said on September 15 in Tampa at a campaign event with veterans. “They say, ‘Geez, the reason I was able to stay sequestered in my home is because some Black woman was able to stock the grocery shelf.’”

"The blinders have been taken off" the American people, says Joe Biden. "They say, 'Geez, the reason I was able to stay sequestered in my home is because some Black woman was able to stack the grocery shelf.'" pic.twitter.com/zYoa2Wn0ef

Biden went on to say: “Or ‘A young Hispanic is out there, these DREAMers are out there, 60,000 of them, acting as first responders, and nurses and docs.’ Or, all of a sudden, people are realizing, ‘My Lord, these people have done so much, not just Black, White, across the board, have done so much for me. We can do this. We can get things done.’”

Clips of the video have circulated on Twitter this week and have accumulated one million views.

Biden has before landed himself in hot water when making off-the-cuff comments, most notably earlier this year when he joined the radio show “The Breakfast Club”. “If you have a problem figuring out whether you’re for me or Trump, then you ain’t black,” Biden told Charlamagne Tha God in May. Continued Below

BIDEN: "If you have a problem figuring out whether you're for me or Trump, then you ain't black."

“Well, first of all, it was a mistake, number one. And I was smiling when he asked me the question. I shouldn’t have been such a wise guy with him. He was being a wise guy and I responded,” Biden said, appearing to blame Charlamagne Tha God for his remark during an interview on CNN in May.

Biden added: “I shouldn’t have done that. It was a mistake. I have never taken the African American community for granted. Never, never, never once. And I’ve had overwhelming support in my state and overwhelming support in the African American community my whole career. But I have never taken it for granted. I worked like the devil for it. And I have to earn it every single time. Nobody’s votes should be taken for granted.”

What is it about Democrats that they automatically see minorities as low-level service workers???

"The reason I was able to stay sequestered in my home is because some black woman was able to stack the grocery shelf." – @JoeBiden pic.twitter.com/ErUJ8VnH37

Meanwhile in Florida on Monday, Joe Biden said, “The good news is I’m here. The bad news for you is I’m coming back. … And I want to see these beautiful young ladies– I want to see them dancing when they’re 4 years older too.”

“Think about this,” Biden told a small crowd in Florida. “Wouldn’t it be an irony, the irony of all ironies, if on election eve it turned out Haitians delivered the coup de grâce in this election?”

Merriam-Webster defines coup de grâce as “a death blow or death shot administered to end the suffering of one mortally wounded”, or “a decisive finishing blow, act, or event”.