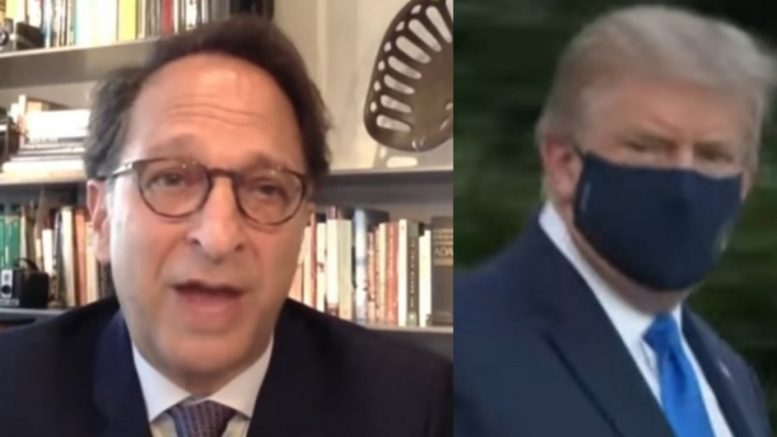 Instead of recovering at the White House, the Commander-In-Chief took the advice from his personal doctors and went to Walter Reed Military Medical Center “out of an abundance of caution” for additional testing and treatment.

Related Article: Sidney Powell Exhibits Why Mueller’s Report Will Likely Be Unfair: ‘[Weissmann] Is A Master Manipulator Of The Media’

Weissmann, who was Robert Mueller’s right hand man in the over two-year long investigation into alleged Trump/Russia collusion, put more of his anti-Trump bias on full display when he slammed the President for taking “science” into consideration “when his life is at stake.”

Weissman tweeted, “Trump goes to hospital as a result of an illness he publicly said was a Democrat hoax. And he does not stay at home and imbibe Clorox as a cure. When *his* life is at stake, science now matters.”

Trump goes to hospital as a result of an illness he publicly said was a Democrat hoax. And he does not stay at home and imbibe Clorox as a cure. When *his* life is at stake, science now matters.

Twitterverse took note of Weissmann’s tweet, and made it backfire as there were more comments knocking down what he implied versus likes and shares of his post.

Here are some of the most highly-engaged responses:

Please show me where he said to inject clorox?

He said disinfectant you fool. And there has been lots of research in disinfectant lights to fight both bacteria and viruses in the lungs. But you knew that.

Weren’t you one of those ‘unbiased’ lawyers on Special Counsel Mueller’s team? A fair lawyer would admit that Trump never called Covid-19 a hoax or suggested anyone imbibe Clorox. Perhaps you aren’t a fair lawyer… pic.twitter.com/ZgA6RCwV0k

I’m sure you were able to suppress all this obvious hatred for the President when you led a bipartisan investigation into his campaign.

The lie is that he ever said that Coronavirus was a hoax. He said it was going to be used as the next hoax to attack him. Similar to Russia and Impeachment hoaxes.

President Trump did not call Covid-19 a ‘hoax’ – he called out our ‘media’ reporting and false numbers as a hoax… and he is correct! https://t.co/HurT21D0mr

If you were a lawyer, you would really suck on getting the facts right.

Coming from the guy who “accidently” put 2 cellphones on airplane mode and entered the wrong password 10 times after the IG asked for them.

Yeah if a regular person did that they would be in jail. A govt. hack it’s just an oops.

Those are lies. Deleting your account would be better than wiping your phone for everyone.