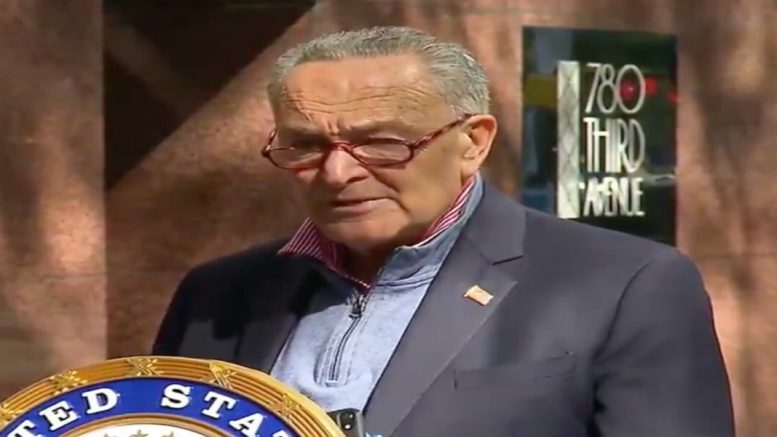 During a press conference on Sunday, Senate Minority Leader Chuck Schumer (D-NY) vented his irritation over “the idea of of having virtual hearings” for Supreme Court nominee Judge Amy Coney Barrett and called for a delay because of COVID-19.

“Mitch McConnell seems to be jamming through hearings on Amy Coney Barrett even though three Senators have COVID, even though he has said it’s not safe for the Senate to meet in session, but it’s okay to have the hearings,” Schumer said.

“It makes no sense.” Senator Schumer said. “If it’s not safe for the Senate to meet in session, it’s not safe for the hearings to go forward. And the idea to have virtual hearings, where no one is with the witness, for the highest court in the land for life appointment, would have such effect on people’s lives, makes no sense. A virtual hearing is virtually no hearing at all. You need to be with the witness.”

“For Mitch McConnell to go ahead with the hearing endangers the safety not only of senators, but of staff who work diligently on the Hill, and they ought to be delayed.” he added. “There is no reason on God’s green earth why these shouldn’t be delayed other than an effort to rush a witness through in an inadequate hearing where people can’t even see the witness face to face. So, we are demanding today, along with millions of Americans and many, many groups, that the hearings be postponed.”

Schumer’s comments come after Senate Majority Leader Mitch McConnell (R-KY) released a statement Saturday regarding the upcoming Senate floor schedule, informing the Senators, “The important work of the Senate’s committees can and will continue as each committee sees fit”, through “a hybrid method”; physically and virtually.

“The Senate Judiciary Committee will convene on October 12th as Chairman Graham has scheduled to begin confirmation hearings for Judge Amy Coney Barrett’s nomination to the Supreme Court. The Senate’s floor schedule will not interrupt the thorough, fair, and historically supported confirmation process previously laid out by Chairman Graham,” Senator McConnell said in his statement. Continued Below

“Since May, the Judiciary Committee has operated flawlessly through a hybrid method that has seen some Senators appear physically at its hearings while other members have participated virtually. The Committee has utilized this format successfully for many months while protecting the health and safety of all involved. Certainly all Republican members of the committee will participate in these important hearings,” Senator McConnell added.

Meanwhile, in March, Senator Chuck Schumer opened the door to remote voting if the coronavirus epidemic prevented lawmakers from working physically in the Capitol. “If we can’t come back for a long time, I think we should explore … a way to vote remotely only in an emergency situation,” he told reporters during a press conference. “… In an emergency, you may have to temporarily”. Video Below

COVID is having a domino effect in the Capitol, and we need transparency and tracing.

3 GOP Senators have already tested positive, and we do not yet know the full extent of exposure.

The Senate needs COVID testing, and the GOP must halt this reckless Supreme Court process now

We leave you with reactions to Schumer from Tammy Bruce and Senator Rick Scott (R-FL):

If @SenSchumer had such an issue with virtual hearings, why is this the first time we’re hearing about it after months of doing them?

The Democrats are just throwing temper tantrums to stop this confirmation process. But we will proceed & we will do it safely. pic.twitter.com/8KtbQyUoyX