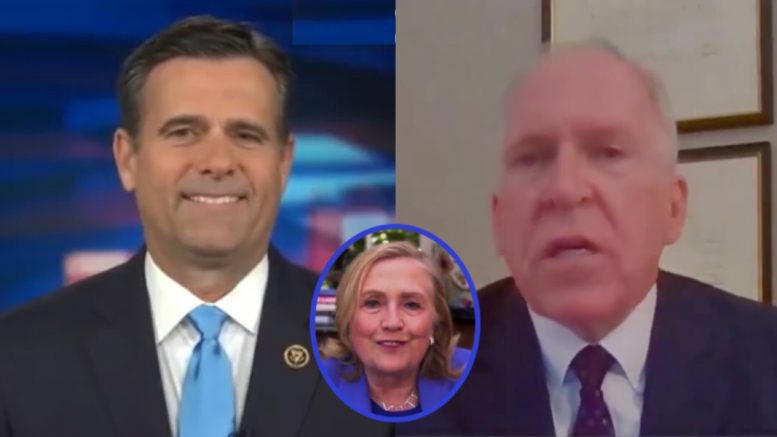 Director of National Intelligence John Ratcliffe on Tuesday, declassified documents that revealed former CIA Director John Brennan briefed former President Obama on Hillary Clinton’s purported “plan” to tie then-candidate Donald Trump to Russia as “a means of distracting the public from her use of a private email server” ahead of the 2016 presidential election, Fox News reported.

DNI John Ratcliffe, however, declassified John Brennan’s handwritten notes on Tuesday, which were taken after he briefed former President Barack Hussein Obama on the intelligence the CIA received, and a CIA memo, which revealed that officials referred the matter to the FBI for potential investigative action.

Asked about the notes and what he makes of DNI Ratcliffe releasing them, Brennan claimed, “Well, John Ratcliffe is anything but an intelligence professional. He is appalling in his selective declassification of information that is clearly designed to advance the political interests of Donald Trump and Republicans who are aligned with him.”

“But, these were my notes from the 2016 period when I briefed President Obama and the rest of the National Security Council [NSC] team about what the Russians were up to. And I was giving examples of the type of access that the U.S. intelligence community had to Russia information,” Brennan continued. “And what the Russians were talking about and alleging.” Continued Below

“Now if in fact, what the Russians were alleging, that Hillary was trying to highlight the reported connections between Trump and the Russians– if in fact, that was accurate, and that’s a big ‘if’– there is nothing at all illegal about that,” Brennan claimed.