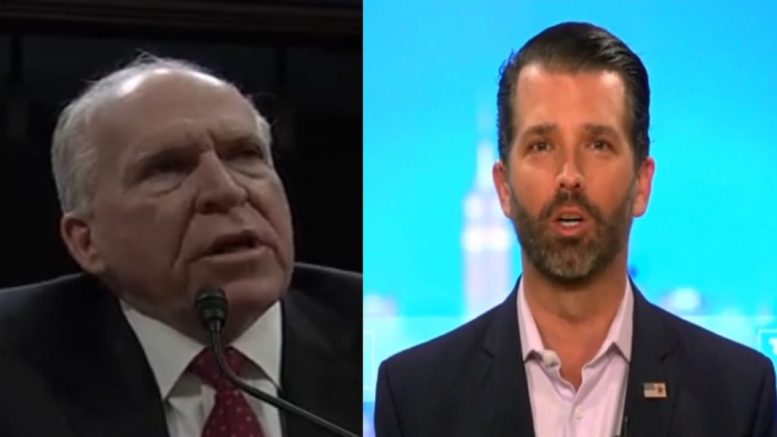 The Commander in Chief on Tuesday evening announced on Twitter that he has “fully authorized the total Declassification of any & all documents” related to the Russia investigation and the FBI’s investigation into former Secretary of State Hillary Clinton’s use of her private email server.

“I have fully authorized the total Declassification of any & all documents pertaining to the single greatest political CRIME in American History, the Russia Hoax. Likewise, the Hillary Clinton Email Scandal. No redactions!” President Trump declared.

I have fully authorized the total Declassification of any & all documents pertaining to the single greatest political CRIME in American History, the Russia Hoax. Likewise, the Hillary Clinton Email Scandal. No redactions! https://t.co/GgnHh9GOiq

“All Russia Hoax Scandal information was Declassified by me long ago. Unfortunately for our Country, people have acted very slowly, especially since it is perhaps the biggest political crime in the history of our Country.” the president tweeted. He added: “Act!!!”

Last year, the president gave Attorney General Bill Barr authority to declassify any documents related to surveillance of the Trump campaign in 2016. President Trump, at the time, also directed members of the intelligence community to cooperate with AG Barr’s investigation.

The president’s tweets come after Director of National Intelligence John Ratcliffe declassified documents Tuesday that reveal former CIA Director John Brennan briefed former President Barack Hussein Obama on twice failed presidential candidate Hillary Clinton’s purported “plan” to tie then-candidate Donald Trump to Russia as “a means of distracting the public from her use of a private email server” ahead of the 2016 presidential election. Continued Below

Donald Trump Jr., the president’s son, reacted to the declassification of former CIA Director John Brennan’s notes on “Fox & Friends” Wednesday, saying, “They all knew, and they let this go on for four years”.

“Given what I went through because of that for three and a half years, I’m obviously pretty upset. It’s sort of what we knew was going on all along. It’s why I was so sort of belligerent at the time and wasn’t just going to be quiet and let it go, [be]cause I knew it was nonsense,” Don Jr. said.

“But what’s really frustrating is now that we know again, this was a set up– now that we know, all of them knew; the CIA, the upper levels of the FBI, the Obama administration, Obama and Biden himself. They all knew, and they let this go on for four years. They let it happen knowing it was nonsense because it would hurt Donald Trump,” he explained.

“This kind of stuff can’t happen in America. This kind of stuff shouldn’t happen in third world countries, but it’s going on right here. And what’s scary is guys, is that no one seems to care. Now that the media– now that it’s against their darling, Obama, despite his failed administration, their darling candidate Joe Biden, despite fifty years of failure in Washington, D.C. with literally no success– certainly not one anyone could name– you know, now that it’s against them, they don’t want anything,” he said. Video Below

“They’re actually outraged that we would want transparency. They’re outraged. The American people should be able to see all of the information. And by the way, the upper levels of the FBI and the CIA are still doing whatever they possibly can to make sure those documents don’t get out. They’ll say, ‘Well you know, there’s secret stuff in there we can’t…’, no, it’s not secret,” Don Jr. said.

“It’s nonsense. It’s that you were all involved and you guys are protecting your failed, corrupted, bureaucratic institutions rather than the Constitution, which is the pattern that we’ve seen for the last years. And it needs to stop now,” he suggested.

Donald Trump Jr.’s full interview on “Fox & Friends”. His remarks on the declassification begin at 5:40 mark into the video:

NEW: declassified @JohnBrennan notes from briefing @BarackObama per @DNI_Ratcliffe
“Alleged approved by @HillaryClinton a proposal from one of her foreign policy advisers to vilify @realDonaldTrump by stirring up a scandal claiming interference by the Russian security service.” pic.twitter.com/IiVb4XlGke