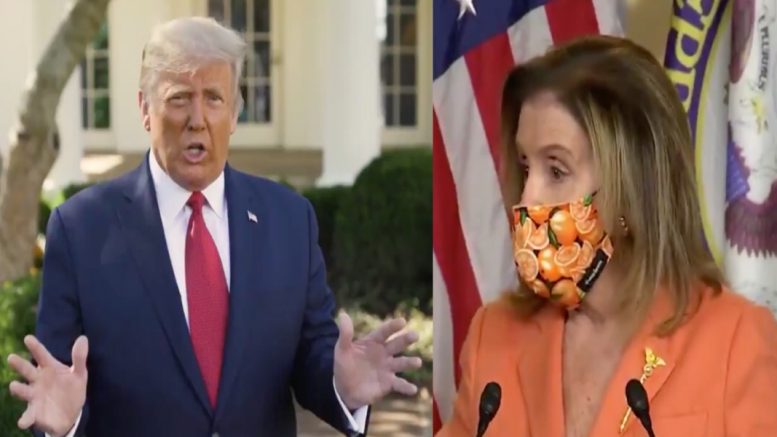 House Speaker Nancy Pelosi (D-CA), during her weekly press conference Thursday, told reporters that she intends to talk about the 25th Amendment, ahead of the November election, following questions regarding President Donald Trump’s health as he recovers from coronavirus, Swamp Drain previously reported.

The 25th Amendment allows for the vice president to become acting president if is determined that the president “is unable to discharge the powers and duties of his office.”

“Tomorrow, by the way, tomorrow, come here tomorrow,” Nancy Pelosi said. “We’re going to be talking about the 25th Amendment.”

"Tomorrow, by the way, tomorrow, come here tomorrow. We're going to be talking about the 25th Amendment."@SpeakerPelosi is out of her mind
pic.twitter.com/ZSceanVbmN

(Related: Pelosi Says Dems Have ‘Options’ & ‘Arrows In Our Quiver’ If Trump Pushes SCOTUS Nomination Before The Election)

The Commander in Chief reacted Thursday to Pelosi’s plan to allegedly remove him from office by using the 25th Amendment, ahead of the November election.

“Crazy Nancy is the one who should be under observation. They don’t call her Crazy for nothing!” President Trump fired back on Twitter. Continued Below

Crazy Nancy is the one who should be under observation. They don’t call her Crazy for nothing! https://t.co/7vE0Jvq0dM

Nancy Pelosi and Rep. Jamie Raskin (D-MD) plan to hold a press conference on Friday at 10:15 AM ET regarding the 25th Amendment, and they plan to introduce legislation and create an independent commission to assess the president’s ability to carry out his duties:

NEW: PELOSI and Rep. RASKIN plan to introduce legislation tomorrow to establish a commission under the 25th Amendment charged with evaluating the president's mental/physical capacity. pic.twitter.com/C8oTqt0Xcx

Meanwhile, some Republicans also hit back at Pelosi on Twitter:

The person who is third in line to the nuclear codes but was “setup” by her hair salon wants to have a conversation about the 25th amendment… Good one🤣🤣🤣 https://t.co/t1XbgfLSdw

The fact Nancy Pelosi mentioned the 25th Amendment today shows she is willing to to pervert it in the same way she was the Impeachment Clause.

Democrats should never have power.

Not sure what’s more ridiculous:

-Invoking the 25th Amendment to remove the President from office 26 days before the election.

The Democrats have lost their minds.

.@SpeakerPelosi will stop at NOTHING to take down @realDonaldTrump.

First it was the Russia hoax, then sham impeachment. Now she’s trying to invoke the 25th amendment because he… fully recovered from the coronavirus?

We won’t let her get away with it.https://t.co/L9fRPFpynC

Congressional Democrats have not stopped their quest to remove President @realDonaldTrump from office since the day he was sworn into office, working night and day to overturn the will of Americans.

Here is another installment of their pathetic series. https://t.co/ZvM2pZGjHl

I wouldn’t put it past @SpeakerPelosi to stage a coup.

She has already weaponized impeachment, what’s to keep her from weaponizing the 25th amendment?

Hey @SpeakerPelosi President Trump is more than capable of carrying out his duties. @realDonaldTrump is WINNING as one of the greatest President in US history.
And he is beating covid.
But you are failing as one of the WORST Speakers of the House in our history.#25thAmendment https://t.co/9B2JnIlotf

If Joe Biden is really winning, why is Nancy Pelosi talking about invoking the 25th Amendment?

If Joe Biden was really up 14 points nationwide, I don't think Democrats would need to be talking about invoking the 25th Amendment against Trump.

Their diversion tactics are getting desperate at this point.

(Related: Rep. McCarthy Blasts Pelosi Over Her Reaction To President Trump’s Positive Virus Test: “This Is Uncalled For”)