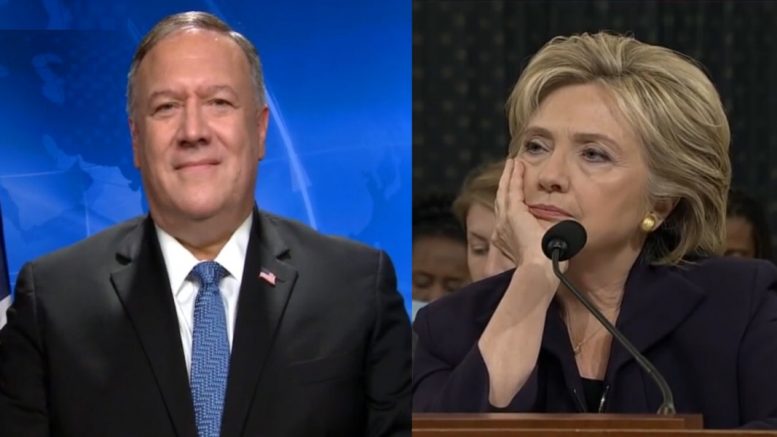 During a Friday interview on Fox News’ “The Daily Briefing,” Secretary of State Mike Pompeo told Dana Perino his agency was working as fast as it could to release and make public twice failed Democratic presidential candidate Hillary Clinton’s missing emails.

Clinton deleted more than 30,000 emails from her private server after she was asked to turn them over to investigators, claiming, “they were personal and private about matters that I believed were within the scope of my personal privacy.”

“We’ve got the emails, we’re getting them out. We’re gonna get all of this information out so the American people can see it,” Mike Pompeo said of Hillary’s Clinton emails, in which she used a private email server while she was secretary of state in the Obama administration.

“Classified information needs to stay in the right places,” Pompeo explained. “Secretary Clinton, when she was here at the state department, did not do that.”

Dana Perino asked Pompeo: “The president has the authority to declassify anything he wants, all authority is to him. Could he declassify it and order it released if he wanted to and he ordered?” Continued Below

Pompeo also assured that President Trump would not do anything to “put any kind of asset or any kind of our officers in harms way”, adding, “We’ll get the information out that needs out. We’ll do it in a way that protects the intelligence sources that we need to protect.”

Mike Pompeo tells Fox News’ @DanaPerino he has Hillary Clinton emails and will publicly release them before the election. pic.twitter.com/DJ0QYhWORG

In November 2017, then-Attorney General Jeff Sessions directed Huber, the U.S. attorney for Utah, and other senior prosecutors to evaluate “certain issues” involving the sale of Uranium One, and other dealings related to the Clinton Foundation. Sessions tapped Huber after requests by congressional Republicans, who had been calling for the appointment of a special counsel to review the matters.

Huber was also tasked with reviewing the FBI’s handling of the Clinton email probe, including allegations that the Justice Department and FBI “policies or procedures” were not followed.

(Related: Trump: ‘Why Aren’t Dems Looking At The 33K Emails Hillary Deleted & Acid Washed After Getting A Subpoena From Congress?’