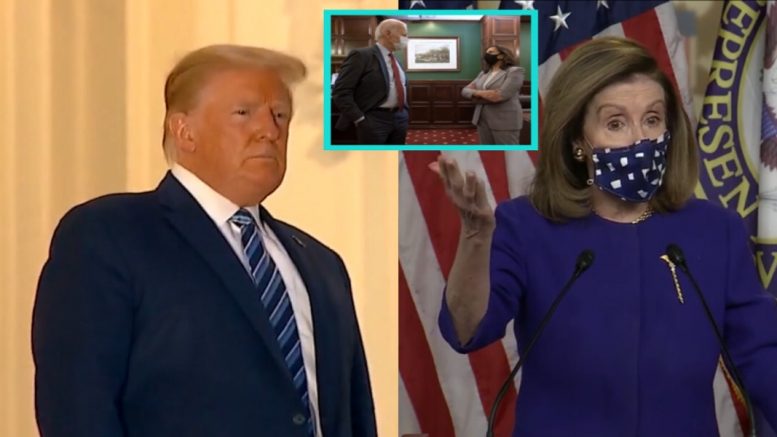 House Speaker Nancy Pelosi (D-CA) held a press conference Friday, announcing legislation to create a commission that would allow Congress to oust a president from office, using the 25th Amendment, though suggesting it would take effect after President Trump leaves office.

The Commander in Chief immediately took to Twitter saying it’s her latest plot to replace Democratic presidential nominee Joe Biden with Senator Kamala Harris (D-CA) should he win the November.

“Crazy Nancy Pelosi is looking at the 25th Amendment in order to replace Joe Biden with Kamala Harris. The Dems want that to happen fast because Sleepy Joe is out of it!!!” posted Trump on Twitter

Crazy Nancy Pelosi is looking at the 25th Amendment in order to replace Joe Biden with Kamala Harris. The Dems want that to happen fast because Sleepy Joe is out of it!!!

“This is not about President Trump. He will face the judgment of the voters.”

House Speaker Nancy Pelosi introduced legislation to create a commission that would evaluate a president’s fitness for office, based on the 25th Amendment https://t.co/XBnrXErJxs pic.twitter.com/Q5gUWnXkXD

She tweeted out a bizarre moment in a television interview where Pelosi responded to a question about potentially impeaching President Trump again with: “Good morning, Sunday morning.”

The only one who needs the 25th Amendment is Nancy Pelosi herself.

However, it appears Twitter pulled the link McEnany posted, but Pelosi’s comments can be heard in the video below.

As reported by The Hill:

The Democrats’ legislation invokes the 25th Amendment, which empowers Congress to create “a body” which, working with the vice president, can remove a president deemed “unable to discharge the powers and duties of his office”.

Sponsored by Rep. Jamie Raskin (D-Md.), a former professor of constitutional law, the bill would create a 17-member panel charged with judging the president’s fitness — and empowered to remove that figure when deficiencies are determined. In such a case, the vice president would take over.

Under Raskin’s bill, the new panel — dubbed the Commission on Presidential Capacity to Discharge the Powers and Duties of Office — would feature 17 members: four physicians, four psychiatrists and eight former high-ranking executive officials to be chosen from a pool of former presidents, former vice presidents, former surgeon generals and former heads of the State, Treasury, Defense and Justice departments. Those 16 figures would be decided by the bipartisan leaders of both chambers of Congress. A 17th member would be named by the other 16.