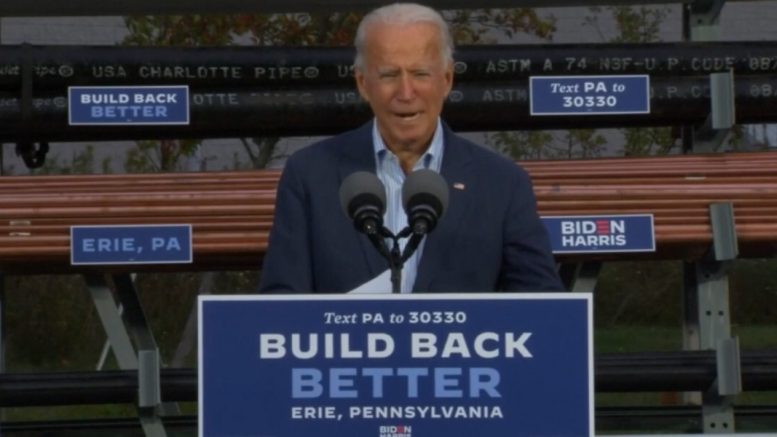 Democratic presidential nominee Joe Biden spoke at a campaign event in Erie, Pennsylvania for about 20 minutes on Saturday and discussed the economy, unions, middle class, health care, and the global coronavirus pandemic.

While stepping to the podium to deliver his remarks, Joe Biden removed his mask then wiped his nose.

Joe Biden wipes his nose and mouth immediately after removing his mask. pic.twitter.com/iHDrpPCF25

(Related: Joe Biden On Whether Voters ‘Deserve To Know’ If He Will Pack The Supreme Court: “No, The Don’t”)

Continuing his speech, Joe Biden said, “After my debate in Cleveland last week, I took a train– actually I’ve ridden a lot. … And I heard the same stories, everywhere I’ve been hearing all over the country.”

“You’re trying your breast,” Biden mistakenly said, appearing to confuse the word “best” with “breast” while reading from his teleprompter. “But it never feels like a enough. You’re not looking for a handout, you’re just looking for a fair shot. That’s how my dad felt when we had to leave Scranton, after no work from when coal died.” Video Below

Joe Biden: "You're trying your breast, but it never feels like enough."

As reported by the Trump campaign:

It’s not the first time Biden’s been busted copying the words of a British politician. Biden got caught in 1987 plagiarizing several lines from a campaign speech by British politician Neil Kinnock and lying about coming from a family of coal miners.

Biden also had to apologize for plagiarizing five pages from a law review journal while he was a law student. Back then, Biden’s plagiarism scandal sunk his failed presidential campaign. He still hasn’t learned from his mistakes.

Joe Biden’s full remarks from his PA speech; his gaffe is at the 2:30 mark: