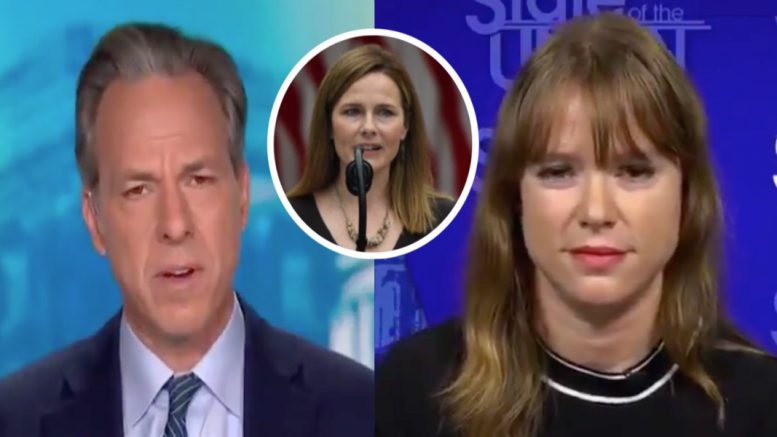 Tapper also pressed Bedingfield on Biden repeatedly refusing to answer whether or not he would pack the Supreme Court, should Biden win the election in November and if Democrats take control of the Senate.

Joe Biden on Saturday told reporters of President Trump’s Supreme Court nominee, Amy Coney Barrett, “It’s not constitutional what they’re doing. We should be focused on what is happening right now. This court is being packed now by the Republicans after the vote has already begun.”

Bedingfield deflected Tapper’s question by arguing that “people have the opportunity to weigh in on this constitutional process through their vote”, adding, “We are now in the mist of the election; millions of people have already cast their votes. And you see the vast majority of the people say that they want the person who wins the election on November 3rd, to nominate the Justice”.

Tapper interjected to tell Bedingfield, “That’s a poll. It’s not the Constitution”. Continued Below

Tapper also pressed Bedingfield over Joe Biden repeatedly refusing to answer whether or not he would pack the Supreme Court. He played a clip, however, of Biden in the past, condemning the idea of Supreme Court packing during his career.

“Biden opposes adding justices to the court. He has for decades. So why is he refusing to weigh in on it now?” Tapper asked Bedingfield.

Bedingfield claimed, “Because Donald Trump and the Republicans don’t get to set the terms of this debate. I mean, this is a distraction that they want to throw out. This is a hypothetical they want to throw out right now to distract from the fact that they are trying to ram through a nominee, who as I said, is going to change the makeup of the court, against the will of the American people.”

Bedingfield deflected on whether Biden would pack the court, prompting Tapper to say, “We get to ask Democrats questions too, and it’s a simple question. And it’s one frankly, that Trump did not invent. It came from progressives in the Democratic Party. And I thought it was odd when [former] Vice President Biden said the other day in response to a reporters question, ‘Voters do not deserve an answer on this’. Of course, voters deserve an answer on his position on every issue.” Video Below

“But we’re not gonna play their game. He’s given an answer. … The answer is I am not going to play Donald Trump’s game,” Bedingfield responded.

Tapper told Bedingfield, “I think a serious policy question is not a game and I don’t think it’s Trump’s game. … We always appreciate you coming on the show answering the questions or definitely side-stepping them.”

Biden evades “Court Packing” question. @FoxNews Because his puppet masters are willing to destroy the U.S. Supreme Court. Don’t let this, and so many other really bad things, happen. VOTE!

It’s a laughable, pathetic accusation, and it directly contradicts what Biden himself said in 2016 and 2017. https://t.co/RHBjjZmk16

(Related Article: Joe Biden On Whether Voters ‘Deserve To Know’ If He Will Pack The Supreme Court: “No, The Don’t”)