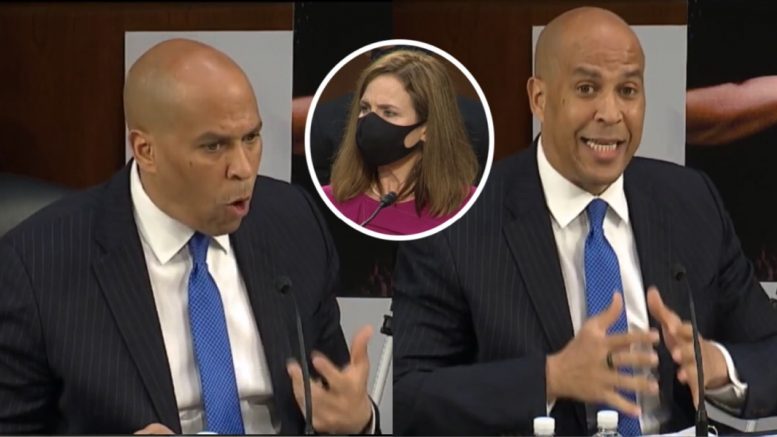 Booker said in his remarks that the “rushed” Supreme Court nomination of Judge Amy Coney Barrett is “not normal” and declared, “I will not be voting to confirm Judge Barrett’s nomination”.

“Nothing about this today is normal. This is not normal!” Senator Booker claimed. “What is going on in America today, in the midst of a deadly pandemic and an ongoing election, having a rushed Supreme Court nomination hearing is not normal and we cannot normalize it.”

However, Breitbart fact-checked Booker’s claim in that the “rushed” Supreme Court nomination of Judge Amy Coney Barrett is “not normal.”

Sen. Mike Crapo (R-ID) delivered his opening statement immediately after Booker, saying, “More than half of all Supreme Court hearings have been held within 16 days of the announcement of the nominee. This case is no different. A couple of examples. Justice Stevens, 10 days. Justice Rehnquist, 13 days. Justice Powell, 13 days. Justice Blackmun, 15 days. Justice Burger, 13 days.”

“These proceedings are following right along in the same kind of process that has historically been the process of the Senate,” he continued.

Senator Mike Crapo also addressed Booker’s argument that it is an election year, noting that a vacancy has “arisen in a presidential election year 29 times”. The Idaho Senator explained that the sitting president at the time made a nomination to fill the vacancy “every one of those 29 times.” Video Below

“In fact, vacancies under a divided government, meaning a Senate and presidency from different parties, have not been filled for over 130 years going back to 1888,” Senator Crapo added, quashing Booker’s claims.

“Having a rushed Supreme Court nomination hearing is not normal and we cannot normalize it.”