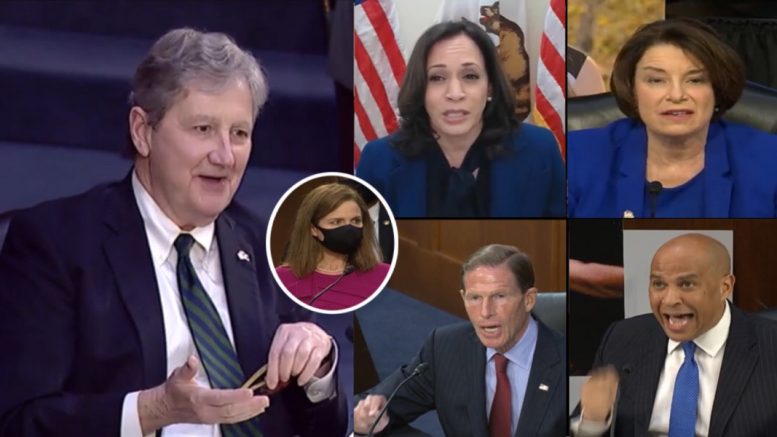 In his opening statement during day one of the Senate confirmation hearing for Supreme Court nominee Amy Coney Barrett, Senator John Kennedy (R-LA) warned Judge Barrett that Democrats might be as “sour” as they were during Brett Kavanaugh’s hearings.

“We all watched the hearings for Justice Kavanaugh. It was a freak show! the Louisiana Senator declared. “It looked like the cantina bar scene out of Star Wars,”

He went on to say: “And to have it implied that because you are a devout Christian, that you’re somehow unfit for public service. Before it’s over, they may call you Rosemary’s baby for all I know. I hope not. And I know as we’ve seen this morning, I know you think it’s unfair. It is unfair for my colleagues to suggest– some overtly, some more indirectly, that if you’re put on the United States Supreme Court you will be on a mission from God to deny healthcare coverage for preexisting conditions for every American. I know that seems preposterous to you, and it seems that way because it is.”

Senator Kennedy’s remarks came after Senate Democrats Monday, painted Judge Amy Coney Barrett as an existential threat to the Affordable Care Act (ACA) should she be confirmed to the highest court of the land. Video Below

We all watched the hearings for Justice Kavanaugh. It was a freak show. It looked like the cantina bar scene out of Star Wars. Here’s hoping people have more respect for the #SCOTUS process this time. pic.twitter.com/7s2IQ9X7ls

“Republicans in Congress tried and failed to reveal the ACA more than 70 times. It’s in the Republican Party platform for justices to reverse the ACA decision. Trump has over and over said this is his reason, and now we’re in this mad rush to meet their Nov. 10 argument deadline, and colleagues pretend this isn’t about the ACA. Right,” said Sen. Sheldon Whitehouse (D-RI) in his opening statement.

Sen. Dick Durbin (D-IL) added that Democrats believe Obama Care is “hanging in the balance” with Judge Barrett’s nomination. “We’re going to drive that issue home, though our colleagues on the other side may want to talk about judicial philosophy. Very interesting, but this is demanding,” he said.

In his opening remarks Senator Blumenthal (D-CT) told Judge Barrett that he would “oppose” her nomination because, if confirmed, he predicted that she will rule as a justice to strike down the Affordable Care Act.

“…. I will oppose your nomination. Your nomination is about the Republican goal of repealing the Affordable Care Act, the Obama Care they seem to detest so much … protections for people with pre-existing conditions, tax credits that will make health care more affordable, bans on charging women more simply because they are women,” he said.

“Your participation, let me be very blunt, in any case involving Donald Trump’s election would immediately do explosive enduring harm to the Court’s legitimacy and to your own credibility. You must recuse yourself,” Blumenthal also demanded.

(Related: Sen. Hirono On ‘Reforming’ The Supreme Court: “It Won’t Happen Unless Democrats Take Back The Senate”)