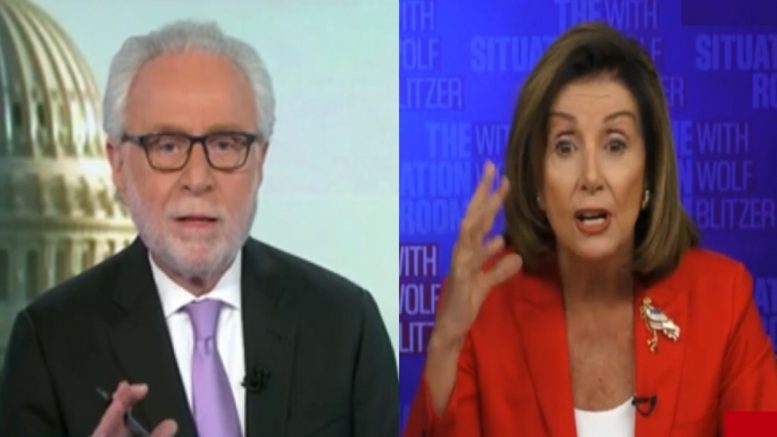 During a Tuesday interview on CNN, House Speaker Nancy Pelosi (D-CA) vented her frustration at Wolf Blitzer, calling him and his colleagues “apologists for the Republican position” when pressed over making a deal with over COVID-19 relief. The discussion turned into a heated exchange at the end of the interview.

Blitzer pressed Pelosi on why she would not accept the $1.8 trillion deal the White House and Treasury Secretary Steve Mnuchin have proposed, prompting Pelosi to say it is still not enough money.

“Even members of your own caucus, Madam Speaker, want to accept this deal. 1.8 trillion dollars,” Wolf Blitzer told Nancy Pelosi, then displayed a tweet from Rep. Ro Khanna (D-CA) which urged Pelosi to take the deal from the White House.

“People in need can’t wait until February. 1.8 trillion is significant and more than twice Obama stimulus. … Make a deal and put the ball in McConnell court,” Ro Khanna tweeted.

Asked what does she say to Ro Khanna, Pelosi vented her irritation at Blitzer, saying, “What I say to you is I don’t know why you’re always an apologist and many of your colleagues– apologists for the Republican position. Ro Khanna, that’s nice. That isn’t what we’re going to do, and nobody’s waiting ’till February.”

“I want this very much now [be]cause people need help now. But it’s no use giving them a false thing just because the president wants to put a check with his name on it in the mail– that we should not be doing all we can to help people pay the rent, food on the table, then enhance benefits that they don’t lose their jobs if they’re state and local,” Pelosi said. Continued Below

Pelosi went on to claim, “We’re talking about the consequences of a pandemic that– the symptoms of a problem that the president refuses to address and that is the coronavirus.”

Blitzer then told Pelosi, “We know the problem out there, but there are millions of Americans who’ve lost their jobs. They can’t pay the rent, their kids need the food, 1.8 trillion dollars. The president just tweeted, ‘Stimulus, go big or go home.’ He wants even more right now, so why not work on a deal with him? And don’t let the perfect, as they say here in Washington, be the enemy of the good?”

“Well I won’t let the wrong be the enemy of the good,” she replied. Continued Below

Blitzer then said he’s also spoken with former Democratic presidential candidate Andrew Yang, who said to take the deal. Pelosi responded by saying, “Honest to God, I really can’t get over it. Because Andrew Yang, he’s lovely. Ro Khanna, he’s lovely. They’re not negotiating this situation. They have no idea of the particulars. They have no idea of what the language is here.”

“I didn’t come here– so you’re the apologist for the Obama– excuse me, God forbid. Thank God for Barack Obama. … What makes me amused if it weren’t so sad is how you all think you know more about the suffering of the American people than those of us who are elected by them, to represent them at that table,” Pelosi vented. “… I feel very confident about the knowledge.”

“With all due respect, you really don’t know what you’re talking about,” Pelosi told Blitzer. “… So do a service to the issue and have some level of respect for the people who have worked on these issues, written the bill to begin with,” she insisted.

Wolf Blitzer then told Pelosi: “I just want to point out though, 1.8 trillion is a lot of money. The American people need that money ASAP because they are suffering right now. I’m not saying it’s perfect but…” Continued Below

Pelosi interjected to tell Blitzer, “And you don’t care how it’s spent. Well, you don’t even know how it’s spent. … Have a little respect for the fact that we know a little something about these subjects. … You evidently do not respect the chairmen of the committees who wrote these bills.”

“And I wish you would respect the knowledge that goes to getting– meeting the needs of the American people. But again, you’ve been on a jag defending the administration all this time no knowledge between our two bills. I thank you for giving me the opportunity to say that to you in person,” she said.

“Leave it on the [note] that you’re not right on this, Wolf! And I hate to say to say that to you, but I feel confident about it,” Pelosi added, which prompted Blitzer to say, “It’s not about me. It’s about millions of Americans who can’t put food on the table, who can’t pay their rent.”

Called out for blocking coronavirus relief, Nancy Pelosi sarcastically responds, "thank you for your sensitivity to our constituents' needs" https://t.co/qwJ9GQzARi pic.twitter.com/Xa2E931nGS