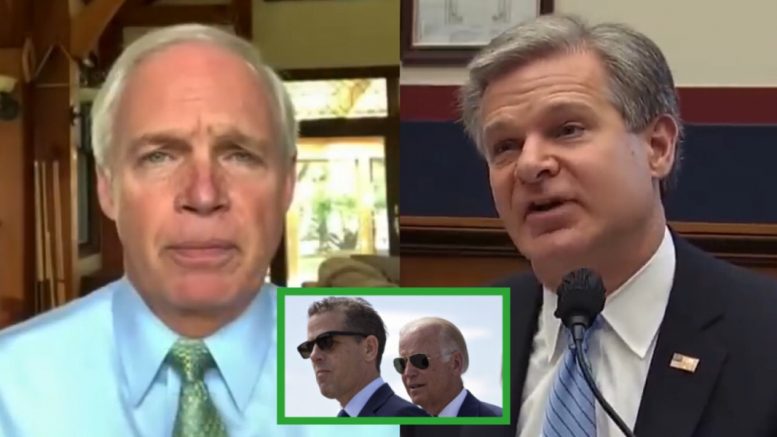 Senator Ron Johnson (R-WI) Chairman of Homeland Security and the Governmental Affairs Committee, sent a letter to FBI Director Christopher Wray on Saturday to inform him that “a whistleblower contacted my committee and informed my staff that he had possession of a laptop left in his business by Hunter Biden.”

Johnson said the whistleblower contacted his committee September 24, 2020, “the day after Chairman Grassley and I released our report titled, “Hunter Biden, Burisma, and Corruption: The Impact on U.S. Government Policy and Related Concerns”.

In his letter to Christopher Wray, Senator Johnson wrote that the whistleblower “also informed us that he provided its contents to the Federal Bureau of Investigation (FBI) in response to a December 9, 2019 grand jury subpoena.”

“I have a responsibility to validate and verify the contents of any information produced to my committee. The committee must know if it receives information that could be fraudulent or not accurate. As my staff explained to FBI officials, this information is crucial for several reasons,” Sen. Johnson said.

“For example, if any information offered to the committee was linked to a foreign adversary’s attempt to interfere in the election, I would expect the FBI to ensure the committee is protected and receives a defensive briefing. Similarly, knowingly providing false information to Congress is a crime, and I would expect the FBI to have informed me if, after having been given notice of what we received, this may have occurred. That is precisely why my staff reached out to the FBI,” he explained.

“For these reasons, the committee must know whether the FBI has assessed the validity of materials the whistleblower has provided, and what, if any, actions the FBI has taken since obtaining this information,” the Wisconsin Senator wrote. Continued Below

“In light of these unanswered questions, I request the following information and material:” Senator Johnson wrote, listing several questions for the FBI Director to answer by October 22, 2020. 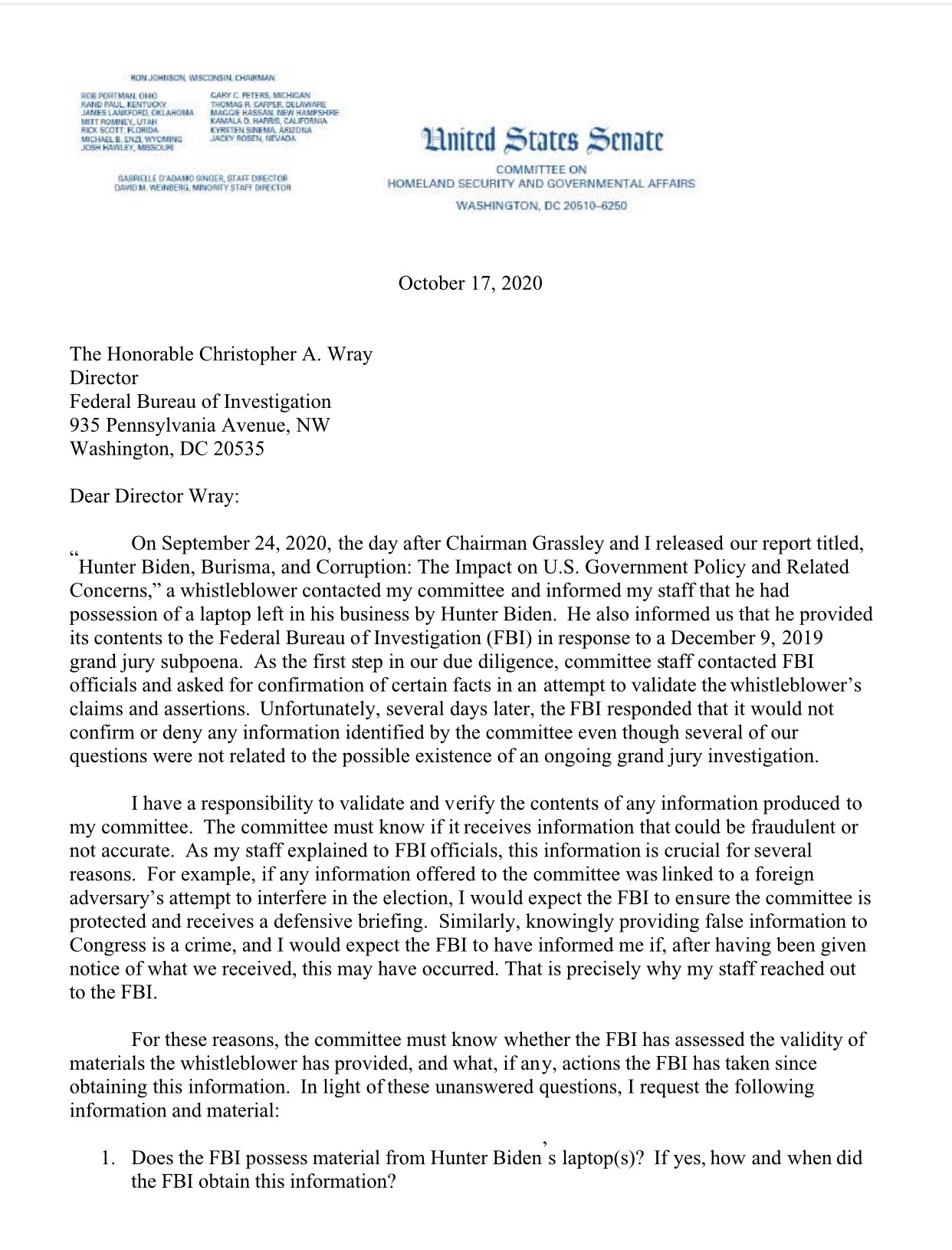 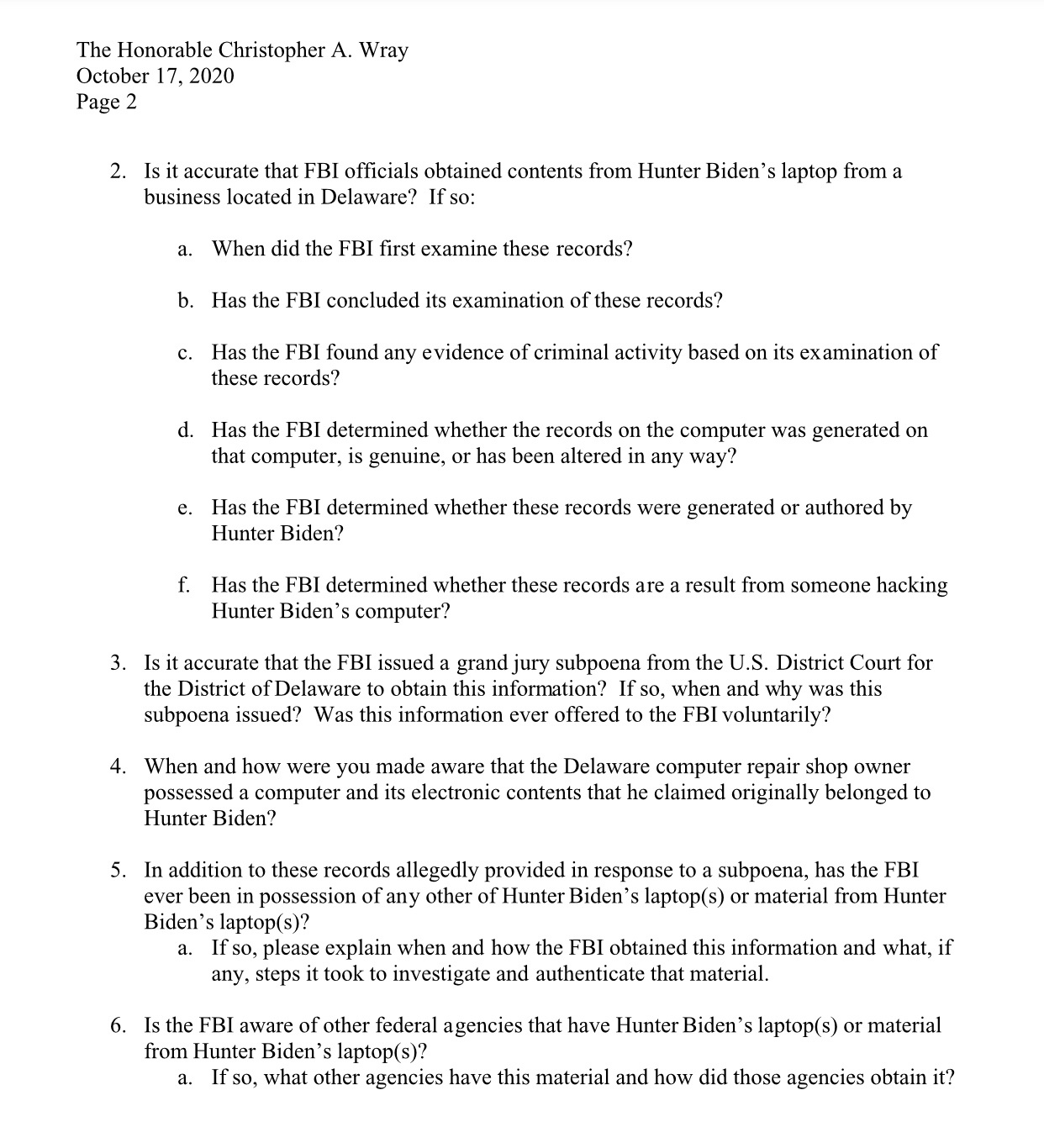 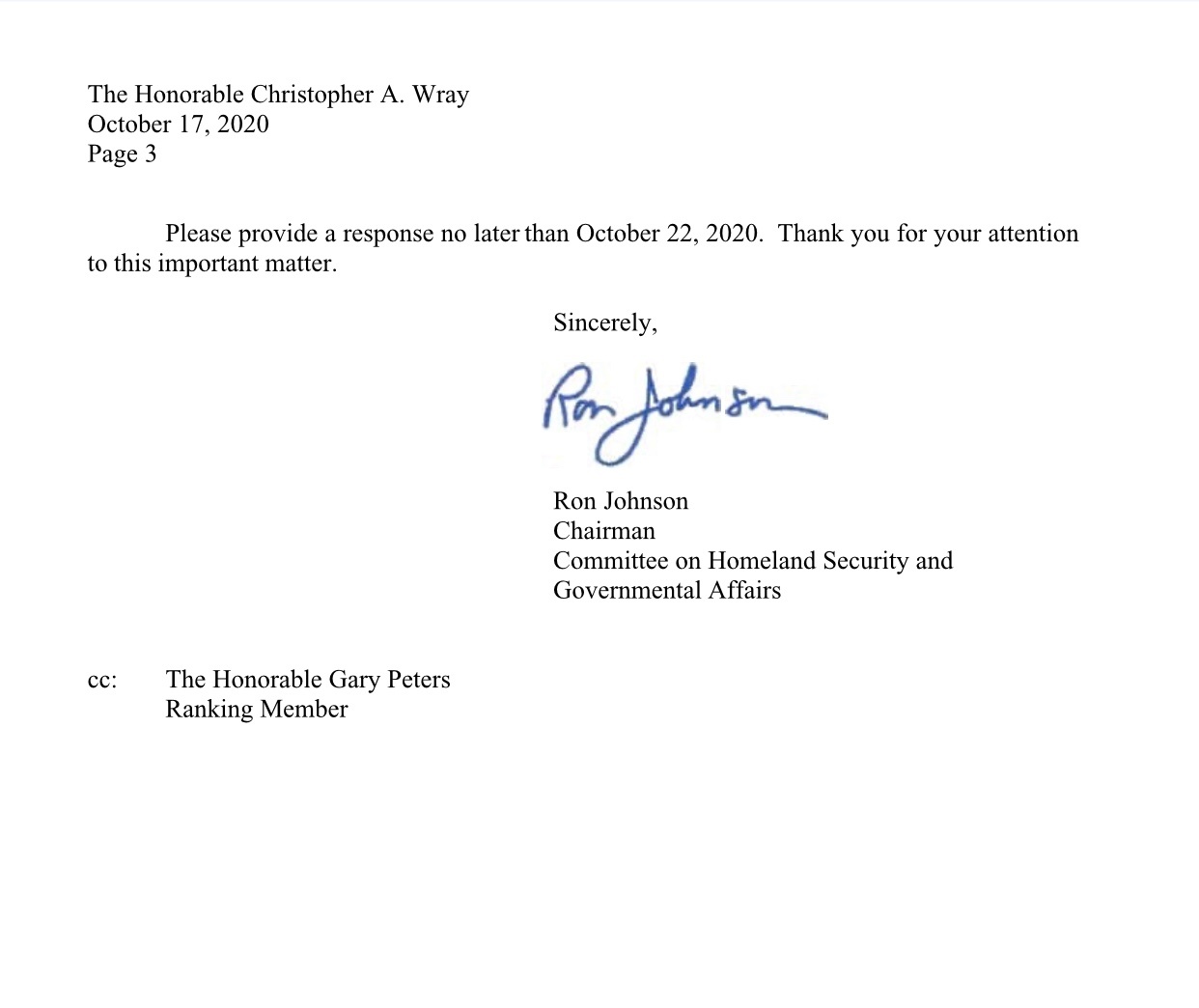 Senator Ron Johnson on the whistleblower who contacted his committee:

On Thursday, House Republicans, led by Rep. Andy Biggs (R-AZ), also sent a letter to FBI Director Christopher Wray, pressing him for answers over whether the FBI was in possession of a laptop that reportedly contained emails by Hunter Biden during the Democrat-led impeachment proceedings of President Donald Trump.

The letter comes after the New York Post published emails alleging that Hunter Biden introduced his father, Joe Biden, to a top executive at Ukrainian natural gas firm Burisma Holdings in 2015 — one year before his father reportedly pressured the country’s government to fire a prosecutor who had launched an investigation into the company.

In the letter to FBI Director Christopher Wray, Republicans suggested that the agency committed a “gross error in judgement” if it did not inform the White House.

“If the FBI was, in fact, in possession of this evidence and failed to alert the White House to its existence that would have given even more weight to the president’s legal defense, this was a gross error in judgement and a severe violation of trust,” the letter says in part.

(Related: House GOP Sends A Letter To Wray For Answers Over Whether The FBI Had Hunter Biden’s Reported Laptop During Trump’s Impeachment)