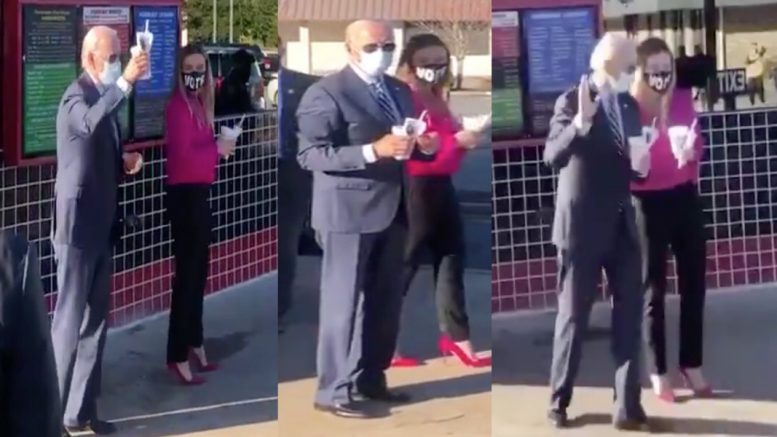 On Sunday, Democratic presidential nominee Joe Biden stopped for a milkshake at Cookout in Durham, North Carolina with his granddaughter and was asked by a reporter which flavor of ice cream he got. When asked about Hunter Biden’s alleged emails, however, Biden waved off the question and scurried away.

This comes as the New York Post published emails alleging that Hunter Biden introduced his father, Joe Biden, to a top executive at Ukrainian natural gas firm Burisma Holdings in 2015– one year before his father reportedly pressured the country’s government to fire a prosecutor who had launched an investigation into the company.

“Mr. Biden, Mr. Biden, what flavor did you get?” a reporter shouted to Joe Biden.

Joe Biden and granddaughter, Finnegan, get milkshakes at Cookout in Durham, NC pic.twitter.com/o4B8ziU7H9

Then Joe Biden refused to answer a question about the FBI seizing his son Hunter’s laptop last year.

The laptop contained emails about the Biden family receiving money from China and other foreign sources. https://t.co/EoGvdS7eUt pic.twitter.com/VCtocB3Br8

As reported by The Freedom Times:

Sunday on Fox News, Jenna Arnold, a campaign surrogate for Joe Biden was pressed over whether or not Hunter Biden’s alleged emails and hard drive is authentic.

Arnold told Vittert that “so much of this is unconfirmed”, referring to the New York Post’s article over Hunter Biden’s emails and hard drive.

Vittert pushed back to ask, “Whoa! Jenna, it’s real simple. You say it’s unconfirmed. Tell us what parts are not true. I mean, Hunter Biden knows what emails he had and hasn’t sent. Are you saying and the campaign saying that these emails aren’t his?”

The Fox News host later told Arnold, “I’m so confused. What is interesting is that I feel like you still haven’t answered the fundamental question, which is: Can anyone say these emails are authentic? And so far I haven’t heard anybody say that.”

Arnold replied, “Yeah. I think that’s fair. I don’t think anybody’s saying they are inauthentic or not.”

(Related: Sen. Ron Johnson Sends A Letter To FBI Wray Over A Whistleblower & Demands Answers For Hunter’s Laptop By Oct. 22)