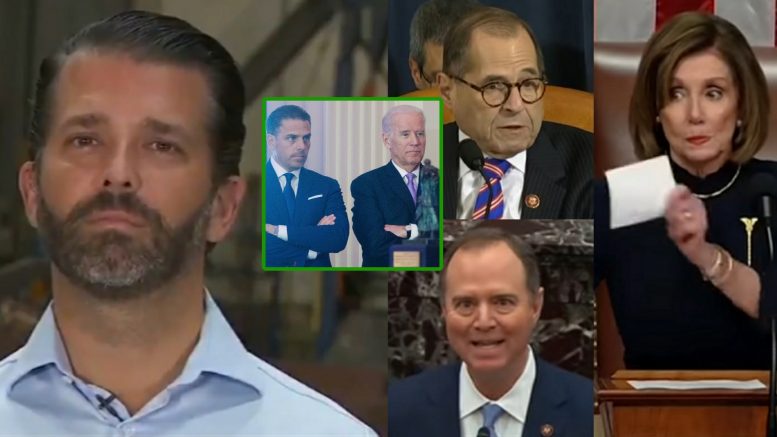 Deafening silence from Joe Biden is a sure sign of guilt, according to Donald Trump Jr., in wake of damning emails uncovered from a laptop thought to belong to the former Vice President’s son Hunter Biden.

And to top things off, Trump Jr. believes that the existence of an apparent secret meeting between Joe Biden and a Ukranian executive, as uncovered on Hunter’s alleged laptop, only shows that President Trump was “100% right” to ask Ukraine’s President Volodymyr Zelensky to investigate potentially crooked business dealings while Hunter Biden served on Burisma’s board of directors and his father served as Vice President of the United States. Trump was ultimately impeached by House Democrats over the inquiry, only to be acquitted by the Senate.

During Tuesday’s airing of Lou Dobbs Tonight, Don Jr. exposed the media and big tech companies for doing all in their power to hide and discredit bombshell emails allegedly found on Hunter Biden’s laptop, despite Joe Biden failing to publicly challenge the authenticity of what’s been reported.

“You would think that if Joe Biden didn’t know, if he didn’t take the meetings, if he wasn’t aware, if the meetings weren’t real, just say so!” Trump Jr. exclaimed. “Come on, Joe! I implore you, please come out and tell us that it’s fake because I really hope that level of corruption hasn’t corrupted the highest levels of goverment as the Vice Presidency and, honestly, what could become the Presidency come January.”

He then slammed Biden for immediately calling a lid and hiding “in his basement” as soon as the New York Post dropped their bombshell report, when he could have simply denied the story if it wasn’t real.

Related Article: Giuliani On All Evidence That’s Been Uncovered On The Bidens: “There’s Enough For A Conviction”

“If these things weren’t real and if these things didn’t happen, you’d come out and say it. But they won’t,” Don Jr. said. “Instead Joe Biden calls a lid for four days and goes, hides in the basement because we know what happened. Because it’s 100% accurate. Because Joe is corrupted.”

Covering for the Bidens: @DonaldJTrumpJr says Big Tech companies are doing whatever they can to protect the corrupt Dems and the Biden family. #MAGA #AmericaFirst #Dobbs pic.twitter.com/qYuHPEJbB7