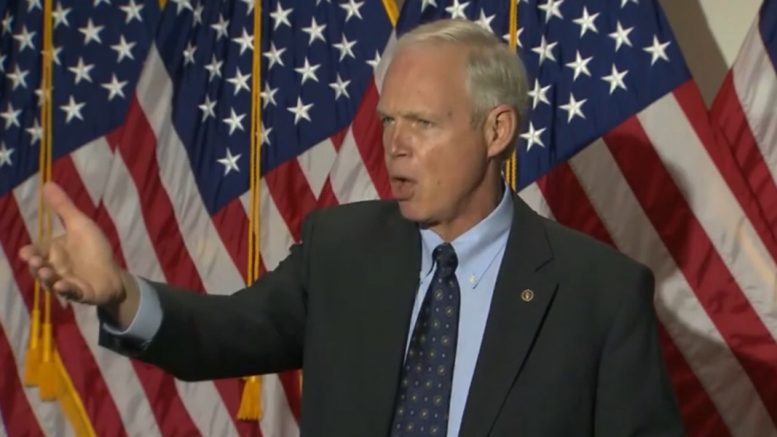 Senator Ron Johnson (R-WI), Chairman of Homeland Security and the Governmental Affairs Committee, sent a letter to FBI Director Christopher Wray on Saturday over whether or not the bureau has any information regarding the possibility that other law enforcement agencies may be aware of or possess information similar to the contents in Hunter Biden’s laptop.

Johnson’s request to the FBI came shortly after the exclusive exposes in the New York Post when they published emails alleging that Hunter Biden introduced his father, Joe Biden, to a top executive at Ukrainian natural gas firm Burisma Holdings in 2015 — one year before his father reportedly pressured the country’s government to fire a prosecutor who had launched an investigation into the company.

The FBI responded to Senator Johnson’s letter Tuesday, saying in part, “We have nothing to
add at this time to the October 19th public statement by the Director of National Intelligence about the available actionable intelligence. If actionable intelligence is developed, the FBI in consultation with the Intelligence Community will evaluate the need to provide defensive briefings to you and the Committee pursuant to the established notification framework.”

“… As the FBI advised the Committee in its letter, dated October 5, 2020, consistent
with longstanding Department of Justice (Department) policy and practice, the FBI can neither confirm nor deny the existence of any ongoing investigation or persons or entities under investigation, including to Members of Congress,” the FBI said.

“As the Inspector General firmly reminded the Department and the FBI in recent years, this policy is designed to preserve the integrity of all Justice Department investigations and the Department’s ability to effectively administer justice without political or other undue outside influences. Therefore, the FBI cannot provide any additional information in response to the enumerated questions in your letter,” the letter read.

Senator Johnson briefly spoke to reporters Wednesday and said he has yet to get answers from FBI Director Wray, noting his committee is working diligently to get answers to the circumstances surrounding Hunter Biden’s laptop and the information contained there-in. Continued Below

“If things are classified, fine. They can turn it over to the committee so we can review it in the SCIF (Sensitive Compartmented Information Facility). But holding on to these documents, the intelligence products– we’ve got nothing out of the CIA. But withholding all these documents from Congress, which means from the American people is completely unacceptable,” the Wisconsin Senator expressed.

Senator Johnson also blasted the media over their “bias” towards Democratic presidential candidate Joe Biden, saying, “It is a scandal and a threat to our democracy”. Continued Below

“I’m calling on the media, you know at what point in time are you actually gonna take up a very important news story?” Senator Johnson wondered.

“That’s kind of a big deal don’t you think– a meeting in the White House with the vice president?” the Chairman of Homeland Security asked. “He met with Devon Archer 5 days before he made a trip to Ukraine, at which point he was dubbed the public face of the Obama administration in Ukraine”.

“We also know a day after Devin Archer was on the board of Burisma. A few weeks later apparently Hunter Biden was appointed to the board. Now we’re getting indications that maybe Hunter was actually on the board on April 13th,” he continued. Video Below

Senator Johnson then listed off some questions the media “should be asking” of Joe Biden. “Why did you meet with Devin [Archer] 5 days before he traveled to Ukraine? What did you talk about? What was discussed? What was the purpose of the meeting? And who else was at the meeting? There’s a good start to questions to the vice president. But you guys ought to have 100 questions for the vice president,” he recommended.

“And it’s a scandal from my standpoint and a threat to our democracy how the press has been so incredibly biased in letting a presidential candidate off the hook, in terms of what I consider pretty serious questions, regarding his family business ties and the extortion in counterintelligence threat– that represents to a potential future Biden administration” Senator Johnson added.

An email allegedly from Hunter Biden’s laptop includes a May 13, 2014 message from former @Buzzfeed reporter @maxseddon to an Obama WH official requesting comment about the “rather odd” news of Hunter joining Burisma’s board.

.@maxseddon Trying to confirm: When you worked for @Buzzfeed did you email Laura Lucas Magnuson on 5/13/14 seeking comment about Hunter Biden joining Burisma’s board? Your response can help verify the authenticity of the content of an email allegedly from Hunter Biden’s laptop.

.@maxseddon If so, I agree with your assessment. You should read my report: https://t.co/obf1Lougv6

And what about a Chinese national funding a $100,000 shopping spree for your son, brother and sister-in-law? Was that another example of someone “putting some honey” in their pockets? https://t.co/ssTutI3Lqu

(Related: House GOP Sends A Letter To Wray For Answers Over Whether The FBI Had Hunter Biden’s Reported Laptop During Trump’s Impeachment)