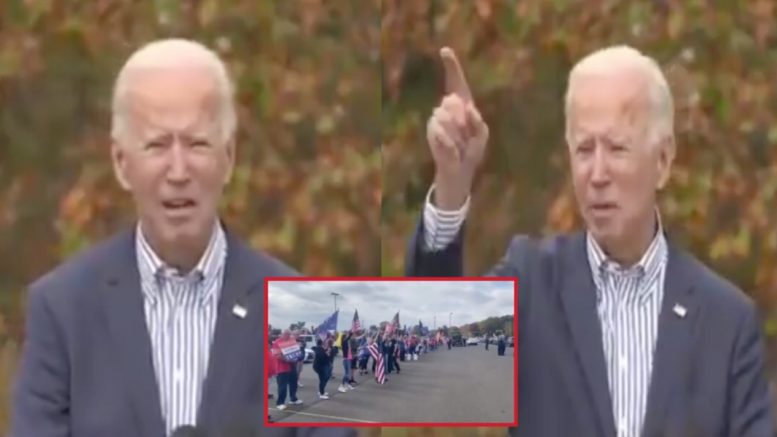 While giving remarks in Pennsylvania on Saturday, Democratic presidential candidate Joe Biden vented his irritation at Pennsylvanian Trump supporters who were disrupting his rally in the background with horn noises and an apparent microphone, calling them “chumps.”

“I’ll work as hard for those who don’t support me as those who do, including those chumps with the microphone out there,” Biden said, then immediately coughed into his hand.

Incredible. The one public appearance Joe Biden does this weekend is a speech in Pennsylvania that immediately turns into a massive Trump rally/car parade/GOTV event. pic.twitter.com/g2DwkxlYWt

More video footage of Biden’s event with Trump supporters waving flags and honking horns during his speech in PA:

Biden was also seen wandering around the stage while his wife Jill Biden spoke while cars were honking:

President Donald Trump, while campaigning in Lumberton, North Carolina on Saturday, mocked Biden’s event, where his supporters were parked in cars.

Donald Trump Jr. responded to Biden insulting Pennsylvanians, saying that the former vice president “has the same distain for hard working Americans as Hillary had with her deplorables comment”.

Joe Biden insults Pennsylvanians who don't support him, calls them "chumps.” He has the same disdain for hard working Americans as Hillary had with her deplorables comment. pic.twitter.com/J0u36tR4a2

"Chumps" is only the latest Biden attack on Trump supporters.

During a fundraiser back in May he called Trump supporters xenophobic and racist and laughed off the idea he wanted their vote. https://t.co/roSdNw1wGu

(Related: Biden Appears To Confuse The Word ‘Best’ With ‘Breast’ While Reading From His Teleprompter)