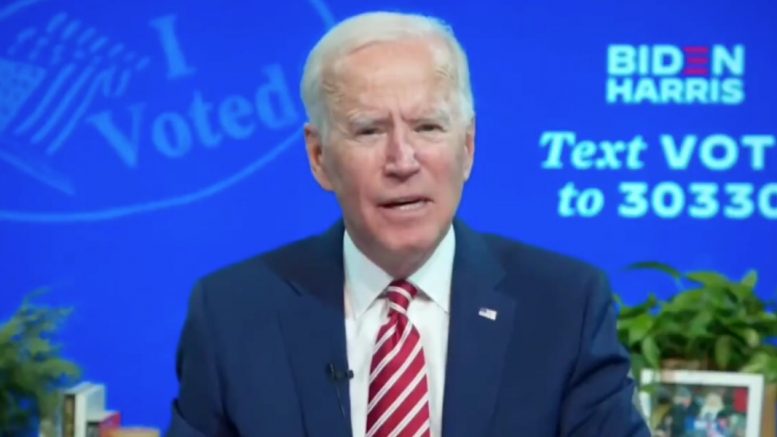 During a Saturday interview on Crooked Media’s “Pod Save America”, Democratic presidential candidate Joe Biden appeared to have misspoke, while answering a question over the subject of voting.

“One final question for you, Mr. Vice President. This interview is going to come out tomorrow, which is early vote day. And so I’m going to ask you a two part question, which is what I think President Obama used to call pulling a Chuck Todd. So part part one: what’s your message to the folks who have not yet voted or do not yet have a plan to vote? And, part two, for the folks who have already voted, the 50 million Americans who’ve already voted, what can they do over the last 10 days to help make sure that you’re the next United States?” host Dan Pfeiffer asked Biden.

Joe Biden responded: “Well, first of all, you know, what really rankles my opponent is I say that the thing that bothers them most is he’s not a patch on Barack’s jeans. I mean, Barack is one hell of a president. And I tell you what, man, what an honor it was, I think you guys believe it, too, to serve with him. An incredible honor. And I’m not being solicitous. I really mean that. He had more integrity in his little finger, than most people have in their whole body. And he had a backbone, like a ramrod, has one.”

“Secondly, we’re in a situation where we have put together, and you guys did it for President Obama’s administration before this, we have put together, I think, the most extensive and inclusive voter fraud organization in the history of American politics,” Biden said, appearing to have misspoke. [Emphasis added].

“What the president is trying to do is discourage people from voting by implying that their vote won’t be counted. It can’t be counted. We’re going to challenge it and all these things. If enough people vote, it’s going to overwhelm the system. You see what’s happening now. You guys know it as well as I do. You see the long, long lines in early voting,” he added. Video Below

Joe Biden brags about having “the most extensive and inclusive voter fraud organization in the history of American politics”https://t.co/wjRKvYi4l2 pic.twitter.com/hC8j4Ijpr7

What a terrible thing for Biden to say! Rigged Election? https://t.co/jQXxeQCZU9

🚨🚨 BIDEN ADMITS TO VOTER FRAUD! 🚨🚨@JoeBiden brags about having the “most extensive VOTER FRAUD organization” in history‼️