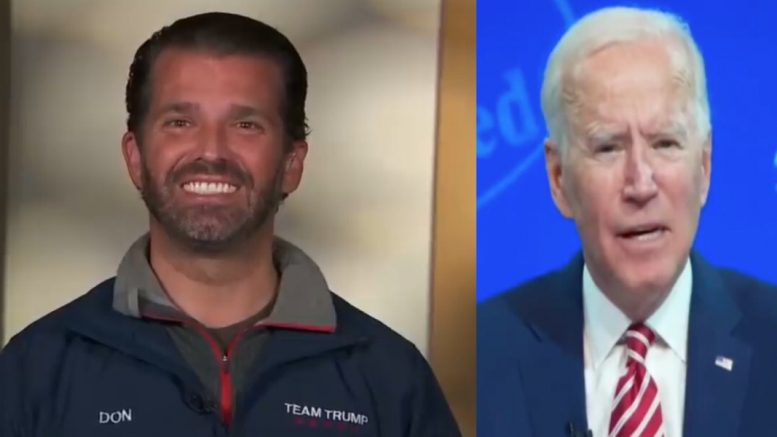 During a Saturday interview on Crooked Media’s “Pod Save America”, Democratic presidential candidate Joe Biden said that it is “crass” to go after a political rival’s children.

The former vice president was referring to President Donald Trump’s attacks on his son, Hunter Biden, in responding to a question on why he was not bringing up how the Trump family has been profiting off the presidency, which the Commander in Chief has claimed Hunter has done.

Host Dan Pfeiffer told Biden during the interview, “I want to start with last night’s debate. On that debate stage, and actually throughout this campaign, President Trump has lobbed false accusation after false accusation about your son, Hunter, for doing things that we know for a fact that Donald Trump’s children have been doing: profiting from the presidency.”

“Yet both last night and throughout this campaign, you have not brought up his children’s activities. And I assume that that’s a specific decision. I’m curious why you’ve made it the specific decision?” Pfeiffer asked.

“I mean, I’ve never thought it was a– look, I’m running against Donald Trump, not his children. And the American people want to hear about their families. Not about Trump’s family or my family, although I’m very proud of my family. But I just think it’s, it’s just not how I was raised. It’s that basic. It’s Donald Trump,” Biden added. Continued Below

“Really? Joe you unmasked me 8 days before my father’s inauguration & helped launch the Russia hoax where your corrupt FBI henchmen tried to jail me WHEN YOU ALL KNEW IT WAS A LIE,” Don Jr. emphasized.

“Stay in your lane

!” he recommended. Continued Below

Really? Joe you unmasked me 8 days before my father’s inauguration & helped launch the Russia hoax where your corrupt FBI henchmen tried to jail me WHEN YOU ALL KNEW IT WAS A LIE.

Stay in your lane🤡!

Biden: It's 'Crass' to Go After a Rival's Children https://t.co/4PGz2LD2aq

In May, Senate Judiciary Committee Chairman Lindsey Graham (R-SC) sent a letter to former Acting Director of National Intelligence Richard Grenell and Attorney General William Barr demanding that the Committee be provided with the names of any official who had made a request to unmask the identity of individuals associated with the Trump campaign or transition team by former Obama administration officials.

The senator’s request came after Grenell, released a list of 39 officials who submitted a request to unmask the identity of former National Security Advisor Lieutenant General Michael T. Flynn (ret.) from November 8, 2016, to January 31, 2017.

“Given the extensive number of requests for the unmasking of General Flynn’s name during this short time period, it raises the question of whether these or other officials sought the unmasking of the identities of other individuals associated with the Trump campaign or transition team,” Graham wrote in a letter to Grenell and Attorney General William Barr. Continued Below

Graham had requested: “A list of names of any officials who requested, between November 8, 2016, and January 31, 2017, to unmask the identities of those associated with the Trump campaign or transition team, including but not limited to Donald Trump, Donald Trump, Jr., Ivanka Trump, Jared Kushner, Corey Lewandowski, Paul Manafort, Steve Bannon, Kellyanne Conway, Sam Clovis, Chris Christie, Carter Page and George Papadopoulos, and the reason given for any such request.”

Earlier in the month, Director of National Intelligence John Ratcliffe declassified documents that revealed former CIA Director John Brennan briefed former President Barack Hussein Obama on twice failed presidential candidate Hillary Clinton’s purported “plan” to tie then-candidate Donald Trump to Russia as “a means of distracting the public from her use of a private email server” ahead of the 2016 presidential election.

“We’re getting additional insight into Russian activities from [REDACTED]. CITE [summarizing] alleged approved by Hillary Clinton a proposal from one of her foreign policy advisers to vilify Donald Trump by stirring up a scandal claiming interference by the Russian security service,” Brennan’s notes read.

(Related: Don Jr. Reacts To John Brennan’s Declassified Handwritten Notes: “They All Knew & They Let This Go On For Four Years”)