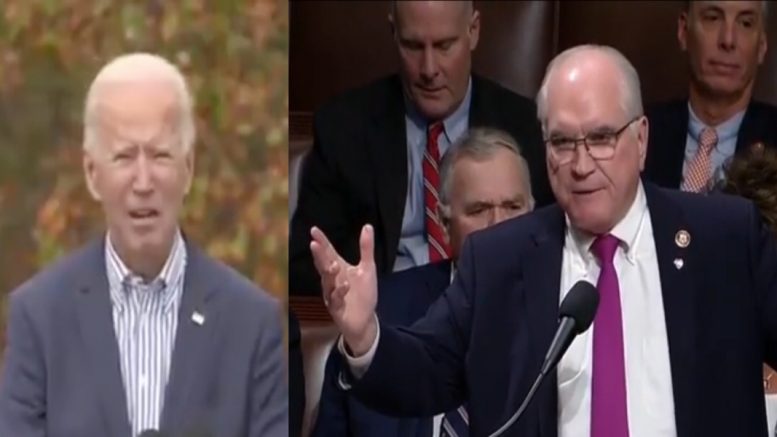 Biden vented his irritation at Pennsylvanian Trump supporters who were disrupting his rally in the background with horn noises, yelling while waving their flags, and talking in an apparent microphone.

“I’ll work as hard for those who don’t support me as those who do, including those chumps with the microphone out there. That’s the job of a president, the duty to care for everyone, the duty to heal,” Joe Biden said, then immediately coughed into his hand.

Rep. Mike Kelly took to Twitter to demand an apology from the former vice president for using the term, which he likened to Hillary Clinton’s disparagement of Trump supporters as “deplorable” in 2016.

“I’m proud to be one of those ‘chumps’ (deplorables?) who will choose to Make America Great Again over the Biden/Harris socialist agenda,” Kelly expressed. Continued Below

Joe Biden should apologize for insulting millions of Pennsylvanians who support @POTUS @realDonaldTrump. I’m proud to be one of those “chumps” (deplorables?) who will choose to Make America Great Again over the Biden/Harris socialist agenda. https://t.co/MbNs0ucDUu

Prior to the former VP’s moment of frustration, Trump supporters gathered outside Biden’s event and turned it into a giant MAGA flag rally and car parade. Only one Biden sign could be seen among a plethora of Trump flags in a video that was uploaded to social media.

Incredible. The one public appearance Joe Biden does this weekend is a speech in Pennsylvania that immediately turns into a massive Trump rally/car parade/GOTV event. pic.twitter.com/g2DwkxlYWt

(Related: Joe Biden On Whether Voters ‘Deserve To Know’ If He Will Pack The Supreme Court: “No, The Don’t”