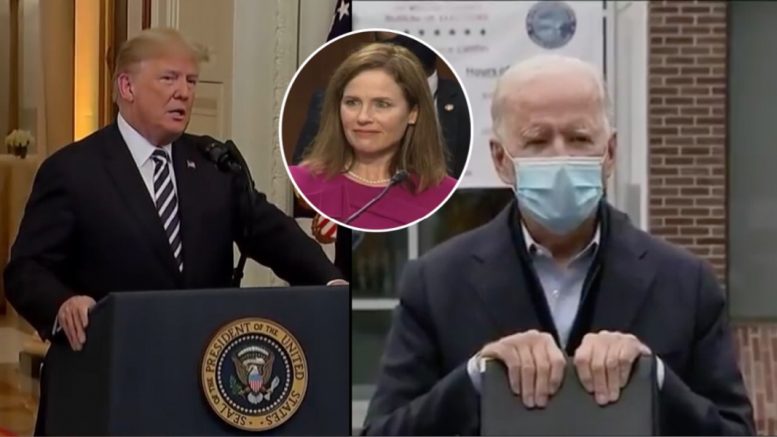 While taking a question from a reporter, Biden was asked if he had “any reaction to President Trump planning an event– an outdoor event, at the White House tonight to celebrate the anticipated confirmation of Judge Barrett?”

The White House is planning to host the swearing-in ceremony on Monday evening for President Trump’s nominee. The Republican-controlled Senate will vote on Judge Amy Coney Barrett’s nomination Monday evening and is widely expected to confirm her as the 115th justice on the nation’s highest court.

Justice Clarence Thomas will swear in Judge Amy Coney Barrett as an associate justice on the Supreme Court on Monday evening following her expected confirmation by the Senate.

Responding to the reporter’s question regarding the celebration at the White House, Joe Biden said, “Look, um. You know, if you have children and you’re raised– all parents are taught that the example you set impacts on how your kids react. When you’re a boss of an operation, the example you set, what you do matters to the rest of the company.” Continued Below

“Well, the words of a president and the actions of a president, they matter,” Biden continued. “They matter a great deal. And when the President of the United States puts on these super-spreader events– you saw what happened when she was announced. All the people, including his family– thank God, they seem to be okay– all the people came down with COVID.”

“I just hope he is willing to have learned a lesson, and there will be significant social distancing. I don’t blame him for celebrating,” Biden admitted though. “There are a lot of things we could be doing– having massive crowds, but the fact is that it’s just not appropriate now.”

“And so, I just hope he and the vice president and others act with some dispatch and do– what everybody knows. People should be tested first before they even show up, number one. Number two: they should be wearing masks. Number three: they should be socially distanced. And number four: it shouldn’t be a huge crowd if it’s outside or not,” he added. Video Below

Joe Biden’s full remarks; his response regarding Judge Amy Coney Barrett begins at 6:45 into the video:

JUST IN: Joe Biden slams President Trump in surprise visit to Pennsylvania: "What in the hell is the matter with this man?" pic.twitter.com/tHAo0JPY5N

The Senate is set to vote on Monday night to confirm Amy Coney Barrett to the Supreme Court in a move that will make the 7th Circuit Court of Appeals judge and Notre Dame law professor the third appointment to the high court by President Trump, solidifying his administration’s legacy even further just a week before Election Day as he seeks a second term, as reported by Fox News.

The last president to nominate three new justices to the Supreme Court was Ronald Reagan, per Fox News.