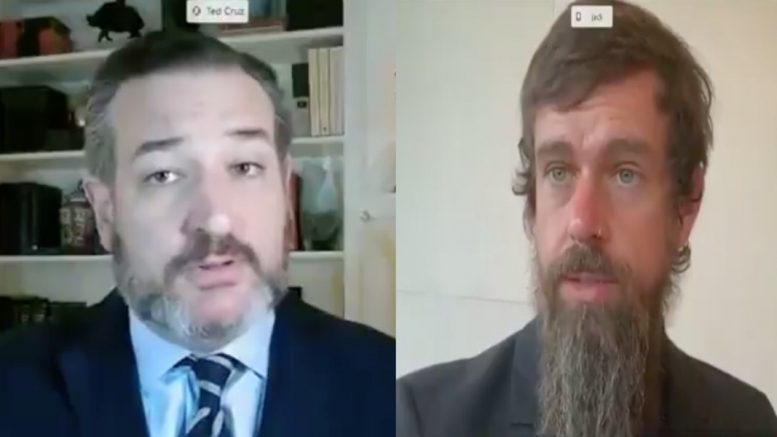 Senator Ted Cruz (R-TX), during his line of questioning, however, ripped Jack Dorsey over Twitter’s election interference capabilities, asking him, “Who the hell elected you?”

“Mr. Dorsey, who the hell elected you and put you in charge of what the media are allowed to report, and what the American people are allowed to hear?” the Texas Republican pressed. “Why do you persist in behaving as a Democratic super PAC, silencing views to the contrary of your political beliefs?”

“We’re not doing that, and this is why I opened this hearing with calls for more transparency. We realize we need to earn trust more. We realize that more accountability is needed to show our intentions and to show the outcomes. I hear the concerns and acknowledge them, but we want to fix it with more transparency,” Dorsey claimed.

Dorsey conceded, however, that Twitter made a mistake in blocking The New York Post over its reporting, which continues to this day and repeatedly insisted that The Post was free to return to the platform, so long as it deletes it’s original tweets on the story. Continued Below

“Does Twitter have the ability to influence elections?” the Texas Senator also asked, which Jack Dorsey responded, “No.”

“You don’t believe Twitter has any ability to influence elections?” Senator Cruz reiterated. “… So you’re testifying to this committee right now that Twitter when it silences people, when it censors people, when it blocks political speech– that has no impact on elections?”

“People have choice of other communication channels,” Dorsey began to say, which prompted Senator Cruz to argue, “Not if they don’t have information.” Video Below

“If you don’t don’t think you have the power to influence elections, why do you block anything?” Senator Cruz wondered.

“We have policies that are focused on making sure that more voices on our platform are possible. We see a lot of abuse and harassment, which ends up silencing people, and having them leave from the platform.”

Twitter is STILL blocking the URL for the NY Post story about the Biden’s foreign corruption & China dealings. pic.twitter.com/1jiJWwhZCt

What @jack told the Senate, under oath, is false. I just tried to tweet the @nypost story alleging Biden’s CCP corruption.