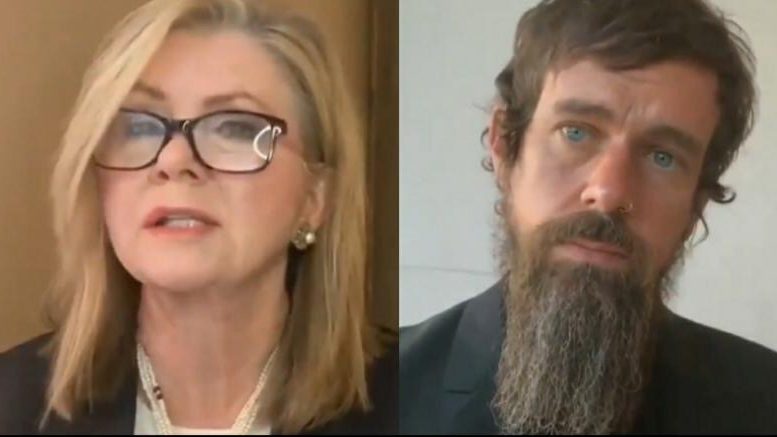 President Trump has been censored by Facebook and Twitter 65 times since May 2018, while Democratic presidential nominee Joe Biden has gone completely unchecked by the social media giants, according to a study by the Media Research Center.

During the hearing Wednesday, Senator Marsha Blackburn began by telling the tech moguls, Facebook CEO Mark Zuckerberg, Twitter CEO Jack Dorsey and Alphabet Inc., Google CEO Sundar Pichai, that they are “kind of in control of what people are going to hear, what they’re going to see, and therefore have the ability to dictate what information is coming in to them”.

“I think it’s important to realize that you’re set up as an information source, not as a news media. And therefore, so censoring things that you all think is unseemly may be something that is not unseemly to people in other parts of the country,” the Tennessee Senator noted.

She then pointed out to Jack Dorsey: “Looking at some of your censoring, Mr. Dorsey, you all have censored Joe Biden 0 times. You have censored Donald Trump 65 times.”

“You claimed earlier that the Holocaust denial and the threats of Jewish genocide of Iran’s ayatollah don’t violate Twitter’s so-called rules, and that it’s important for world leaders like Iran’s terrorist leader to have a platform on Twitter. So let me ask you this? Who elected the ayatollah?” she asked referring to Senator Cory Gardner’s questions, which Dorsey replied, “I don’t know.” Continued Below

“I think this is called a dictatorship. So are people in Iran allowed to use Twitter, or does the country whose leader you claim deserves a platform ban them from doing so? … Iran bans Twitter. … Mr. Dorsey, is Donald Trump a world leader?”

Dorsey responded “Yes”, which prompted Senator Blackburn to respond, “It would be important for world leaders to have access to your platform. Correct? … And so, why do you deny that platform via censorship to the U.S. president?”

“We haven’t censored the U.S. president,” Dorsey claimed. Continued Below

“We have labeled tweets of world leaders around policy of not taking down the content, but simply put more context around it,” Dorsey said.

“Okay, and the U.S. president you have censored 65 times. You testified that you’re worried about disinformation and election interference. That is something we all worry about, and of course, for about 100 years, foreign sources have been trying to influence U.S. policy and U.S. elections,” the Tennessee Senator said.

“Now, they’re on to your platforms. They see this as a way to get access to the American people. So given your refusal to censor or ban foreign dictators while regularly censoring the [U.S.] president, aren’t you at this very moment personally responsible for flooding the nation with foreign disinformation?” Senator Blackburn wondered.

Dorsey again, falsely reiterated that Twitter has “not censored” President Trump, but that the social media platform has only added labels to his tweets. Video Below

The American people do not trust big tech. pic.twitter.com/aw9Zrfy14z

Media Research Center’s Techwatch unit went through all social media posts by Trump, Biden and their campaigns from May 2018 through Oct. 16, 2020, and found that Biden was “untouched” while Trump was censored a whopping 65 times.

Yet they haven't touched any of Joe Biden's accounts even once. https://t.co/wu5rlzkxmU

If @Jack agrees that the Holocaust denial is misinformation, why are outrageous claims like this allowed to remain on @Twitter?https://t.co/y11mqhlUvb

Or does Twitter view this as “commentary on political issues of the day” as it did the Ayatollah’s call for genocide against Jewish people?https://t.co/XAJUxZ6ZkU