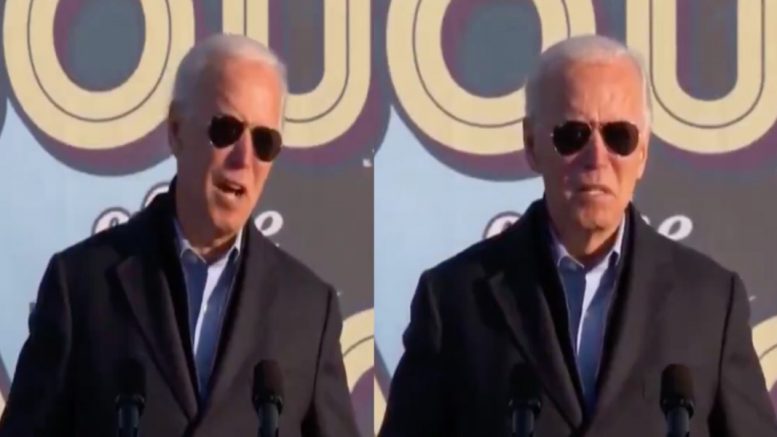 During a drive-in rally Friday afternoon in a parking lot in St. Paul, Minnesota on Friday, Democratic presidential nominee Joe Biden was interrupted and drowned out by Trump supporters that showed up outside of the event and were heard making a lot of noise.

Apparently, the Trump supporters made loud enough noises that could be heard from Biden’s stage, because the former vice president, seemingly irked, referred to those supporters as “ugly”.

Trump supporters making noises outside of of Joe Biden’s event:

Joe Biden: “This isn’t a political statement like those ugly folks over there beeping their horns!”

Listen to the cars honking at Biden's event in St. Paul, Minnesota while he's yelling at the top of his lungs, trying to give us all headaches.

But then it gets worse as he attacks Trump supporters as "ugly folks."

Talk about a guy who says he'd represent all Americans! 🙄 pic.twitter.com/ofbIauZxfX

While giving remarks in Pennsylvania last weekend, Joe Biden vented his irritation at Pennsylvanian Trump supporters who were disrupting his rally in the background with horn noises and an apparent microphone, calling them “chumps.”

“I’ll work as hard for those who don’t support me as those who do, including those chumps with the microphone out there,” Biden said.

More video footage of Trump supporters outside of Biden’s event in Minnesota:

Reports on the ground of over 200 Trump supporters outside Biden’s poorly attended Minnesota event.

Uh oh looks like Joe’s in trouble in Minnesota 👀 pic.twitter.com/BQaCyIOMms

There are more Trump supporters outside of Biden’s Minnesota event then there are cars watching Biden speak 🤣 pic.twitter.com/r9IKK6WXtg

After his 14 minute speech in which he called them "ugly," Minnesotans bid Joe Biden a proper farewellpic.twitter.com/2DTO2zf0gh