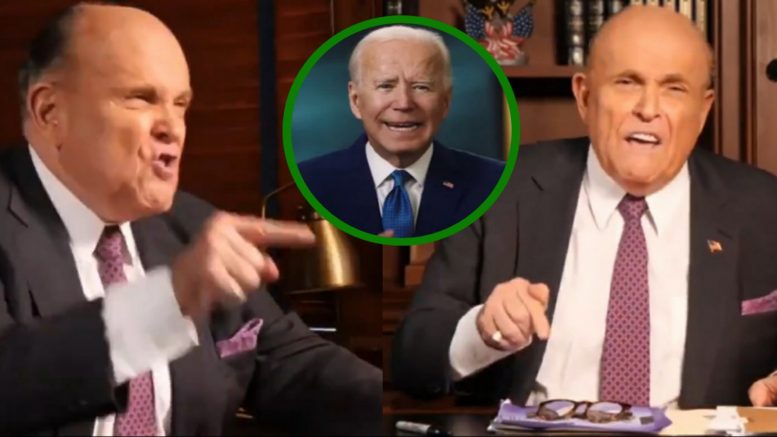 In a nearly 33-minute video uploaded to YouTube, Giuliani systematically went through several key documents that he says proves that former Vice President Joe Biden profited up to $30 million in business dealings involving his son Hunter Biden, other members of the Biden family and individuals connected the Chinese government.

“I didn’t write it, Russians didn’t write it and I didn’t get the 30 million,” he continued. “Your prince got it — your Prince of Darkness, Joe Biden. The guy who used his son — a drug addict — to be his bagman.”

“Why do you think his son lost his teeth at 40 years old?” Giuliani questioned. “Because under this kind of pressure, working with murderers organized criminals… what do you think happens to a drug addict, dad, when you put them in with people like that? He becomes a much worse drug addict, a degenerate drug addict.”

Then, while defiantly pointing at the camera as if he was pointing at Joe Biden, Rudy exclaimed, “You couldn’t find someone in Washington to do this for you?! You want to use your son and ruin his life?! You want to be President of our country?! My goodness, you should check-in into the local federal prison and start doing your time. That’s where you belong, not at the White House!”

“You used your family to pick up your bribes, hide your bribes, live the life of a billionaire. And by the way, I don’t think you failed at all of those negotiations just because you’re stupid. I think you failed at those negotiations because you sold out the United States of America. That’s what I think you did, and you were ready to do it again if we didn’t catch you!” he concluded. Video Below

Here is the full video, where Rudy Giuliani makes his case against Joe Biden: