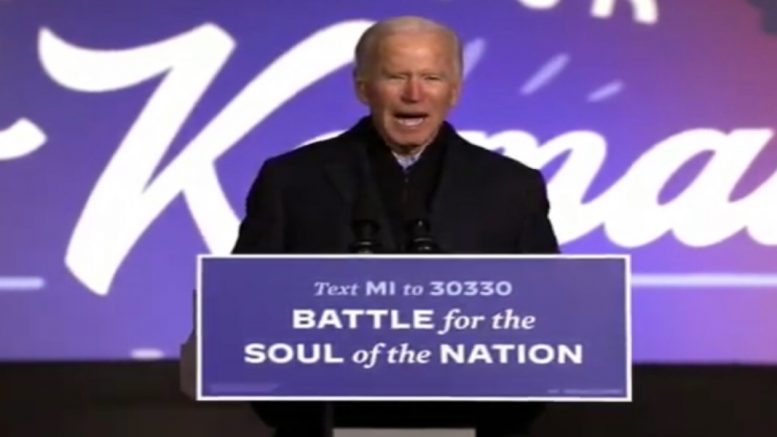 Democratic presidential nominee Joe Biden held an event Saturday in Detroit, Michigan Saturday, confusingly telling voters in part, “I don’t need you to get me elected, I need you once I’m elected”.

Joe Biden to his voters:

Joe Biden tells voters “I don’t need you to get me elected.” pic.twitter.com/kMTqiIx2B4

During an interview last weekend on Crooked Media’s “Pod Save America”, Democratic presidential candidate Joe Biden appeared to have misspoke, while answering a question over the subject of voting.

Following Biden’s remarks in Detroit Saturday, in that he does not “need you to get me elected” one could wonder if Democrats have something planned up their sleeve as Biden appears awfully confident. Continued Below

Joe Biden’s full remarks telling voters “I don’t need you to get me elected, I need you once I’m elected” begin at 1:48:00 into the video:

Earlier in the day, Biden held another campaign event Saturday in Flint, Michigan and spoke in part about healthcare and the affordable heath care plan that was put in place under the Obama administration.

Biden alleged that President Trump “thinks health care is a privilege”, adding, “Barack and I think it’s a right for people to have badakathcare!” He did not seem to correct what he had mistakenly pronounced, but instead, continued on with his speech. Continued Below

Joe Biden: “Barack and I think it’s a right for people to have badakathcare.” pic.twitter.com/UqWELjSAMN

A video clip of part of his remarks surfaced on Twitter Friday, where it appeared Biden had told the members in the audience, “I’ll lead an effective strategy to mobilize trunalimunumapzure!”

(Related: Biden Gets Irked By Trump Supporters Making Noises Outside Of His Rally, Calls Them ‘Ugly’)