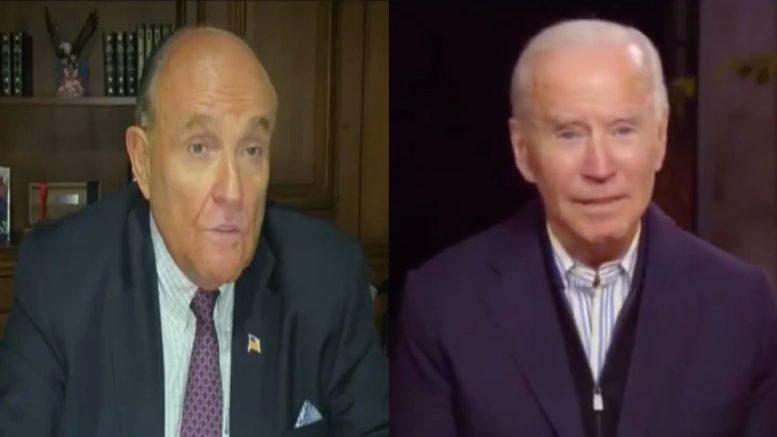 Giuliani revealed that there is “more to come” as the “hard drive is about only halfway analyzed at this point”, adding, “And every time we analyze it, we find unfortunately, a new and more dastardly crime committed by the Biden family”.

Patrick Ho Chi Ping was charged on Dec. 18, 2017 with conspiracy to violate the Foreign Corrupt Practices Act (FCPA) and money laundering related to CEFC China Energy contracts in Uganda and Chad. Ho had been an executive at the multi-billion dollar Chinese energy company CEFC before his arrest. Ho was convicted in March 2019 and sentenced to three years in prison, per Daily Caller.

“Ye Jianming, who was considered to the be richest man in China, or he was until they killed him–the number two guy, Patrick Ho, is described as the spy master of China,” Giuliani said. “Third one is also a spy. Those are the people who are providing the 10 million a year for the Biden family, including the ‘big guy’, Joe. So essentially, the Biden’s were working for Chinese intelligence operatives, which gets pretty close to the crime of espionage. If that were you or me– if you or I were taking money from the spymaster of China, you and I would be in jail right now.” Continued Below

“Joe Biden took something like … 30 or 40 million dollars over a 5 year period into the Biden crime family. I mean, this is disgusting, it’s horrible, and it’s a threat to our national security. It’s being covered up by 80% of our media,” Giuliani said.

Newsmax’s host Grant Stinchfield played a video clip of Hunter Biden on a video recording appearing to reference Patrick Ho, who was a former Secretary for Home Affairs in Hong Kong, as a ‘spy chief of China’ while lamenting how his business partner Ye Jianming of CEFC China Energy had disappeared.”

Stinchfield said that if “the tape is legitimately and it’s Hunter Biden, the FBI should not have a money laundering operation underway, they need … an espionage operation, a pay to play operation … money flowing into the White House”. Continued Below

Giuliani responded saying that the “FBI should arrest him tomorrow. I’ll fill in the rest of it for you if you want. There are 12 documents that explain this whole thing in vivid color. Patrick Ho, Ye Jianming, and Gongwen Dong, all Chinese communist spies. … This operation was set up to set up Joe Biden, and Joe Biden is a partner in this operation.”

“This is the one in which you have the hidden memorandum that says ‘To H– 10% for the big guy’. You then go on and find two more emails, in which Hunter describes his father– says ‘My father is the big guy’. Then we have Mr. Bobulinski, who testifies that Joe Biden is referred to as the ‘big guy’. And just in case you have any problem with it, they open the office– joint office between the Biden’s and the Chinese communist party company. Joe Biden is given the first key, and Jill Biden is given the second key,” he continued.

“You want to go further? Then there’s a 5 million dollar forgivable loan made to the Bidens. Now what’s a forgivable loan? It’s a loan you don’t pay back. … Well that goes into one account, then into a second account, then into a third account, which happens to be Hunter Biden’s company. And we have a text message that says Hunter Biden shares half of that with father,” Giuliani said. Video Below

“So I don’t know what you need. I just proved the case. I’m happy to go to court. … The guy running for president is a threat to the national security to this country, and 80% of the media is blocking that from the American people. I don’t know what you call that, but this is about the scummiest thing they’ve ever done,” Giuliani added.

CHINESE MEDDLING: @RudyGiuliani details his findings on Hunter Biden's 'laptop from hell' and the ongoing investigation from the FBI. [with @Stinchfield1776 on Newsmax TV: https://t.co/VlT7z8drtO] pic.twitter.com/djR1H8C2IS

FBI INVESTIGATION: @Stinchfield1776 on the 'influence and power' the Chinese government hoped to gain over the United States through dealings with the Biden family. https://t.co/VlT7z8drtO pic.twitter.com/N84Zni9PZR

(Related: Giuliani Lashes Out At Joe Biden After Presenting Alleged ‘Proof’ Of Corruption: “You Want To Be President Of Our Country?!”)