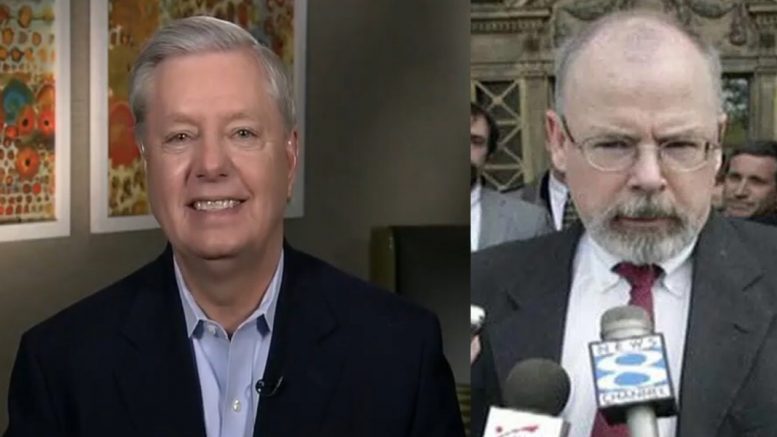 Senate Judiciary Chairman Lindsey Graham (R-SC) forecasts a post-election release of U.S. Attorney John Durham’s report into the origins of Russia investigation, telling host Maria Bartiromo during an interview Sunday on Fox News’ “Sunday Morning Futures” that he “will be shocked if people are not indicted”.

John Durham’s probe has led to one conviction so far with former FBI attorney Kevin Clinesmith, who plead guilty and admitted that the altered an email to say that Carter Page was not a source for another government agency. Page has said he worked with the CIA. That email was part of a chain that was used as evidence in the final warrant renewal application in 2017.

Asked what is he going to do in terms of holding people accountable, Senator Graham said that former Deputy Director of the FBI, Andrew McCabe, is testifying before his committee November 10 and another hearing will be held with the FBI over Hunter Biden’s laptop, though he did not specify a date for the FBI.

“It was Hillary Clinton in July trying to cook up a plan to link Trump to Russia in 2016. In September of 2016, she tried to attach Trump to Russia, to deal with her email problem to deflect,” Senator Graham said.

“We’ve learned there was Russian collusion, but it was between the Clinton campaign, and it was between Russia,” the Senate Judiciary chairman continued. “Clinton and Russia, not Trump and Russia, and we learned that Crossfire Hurricane was the most corrupt investigation, maybe in the history of the FBI. Durham is all over this.”

“After the election, you’re going to get a report, and I’ll be shocked if people are not indicted,” the South Carolina Senator expressed.

In October, Director of National Intelligence John Ratcliffe declassified documents that revealed former CIA Director John Brennan briefed former President Obama on Hillary Clinton’s purported “plan” to tie then-candidate Donald Trump to Russia as “a means of distracting the public from her use of a private email server” ahead of the 2016 presidential election.

“We’re getting additional insight into Russian activities from [REDACTED],” Brennan’s notes read. “CITE [summarizing] alleged approved by Hillary Clinton a proposal from one of her foreign policy advisers to vilify Donald Trump by stirring up a scandal claiming interference by the Russian security service.” Continued Below

In response, to DNI declassifying Brennan’s handwritten notes, the former CIA director claimed Director of National Intelligence claimed during a CNN interview: “John Ratcliffe is anything but an intelligence professional. He is appalling in his selective declassification of information that is clearly designed to advance the political interests of Donald Trump and Republicans who are aligned with him.”

Senator Lindsey Graham’s full remarks. His comments over the Durham probe begin at the 4:40 mark in the video:

John Durham was tasked by Attorney General William Barr in the spring of 2019 to examine misconduct by federal law enforcement and intelligence officials surrounding the FBI’s investigation into ties between President Trump’s 2016 campaign and Russia. Durham’s review later turned into a criminal inquiry in October 2019.

I have fully authorized the total Declassification of any & all documents pertaining to the single greatest political CRIME in American History, the Russia Hoax. Likewise, the Hillary Clinton Email Scandal. No redactions! https://t.co/GgnHh9GOiq

(Related: Rush Limbaugh Reveals Why Dems Are ‘Scared To Death’ Of ‘Colliding’ With Durham’s Findings: ‘They Know They Did It’)