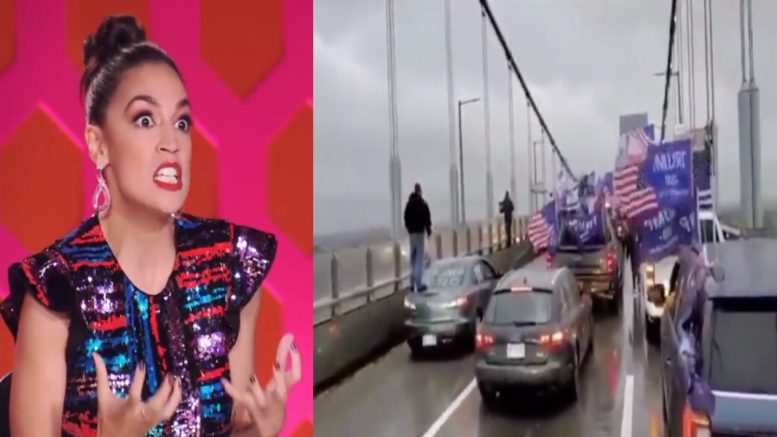 As the presidential election approaches, there has been a noticeable increase in parades of vehicles flying flags in support of President Donald Trump. From one coast to another, pro-Trump vehicles have backed up traffic for miles and miles. There have also been pro-Trump boat parades along the country’s coastlines, Newsweek reported.

A video posted to Twitter on Sunday showed backed-up vehicles, which caused traffic on New York City’s Whitestone Bridge– the portion of Interstate-678 connecting Queens with the Bronx over the East River. In the caption of the tweet with the video, it read: “I hope AOC isn’t using the Whitestone Bridge today there is a lot of traffic!”

Rep. Alexandria Ocasio-Cortez (D-NY), whose district includes the northern part of Queens and eastern part of The Bronx, responded to the tweet by calling the Trump supporters “a pileup of chumps.”

“I took the [Throgs] Neck. Heard there was a pileup of chumps on the Whitestone,” the so-called squad member tweeted.

Last weekend while giving remarks in Pennsylvania, Democratic presidential candidate Joe Biden vented is irritation at Pennsylvanian Trump supporters who were disrupting his rally in the background with horn noises and an apparent microphone, calling them “chumps.”

“I’ll work as hard for those who don’t support me as those who do, including those chumps with the microphone out there,” Biden uttered. Video Below

I hope AOC isn’t using the Whitestone Bridge today there is a lot of traffic! 🇺🇸 pic.twitter.com/E59ErRfnFB

I took the Throggs Neck. Heard there was a pileup of chumps on the Whitestone https://t.co/Vbaug6OLjy

This weekend in Austin, Texas, some vehicles sporting Trump flags sent a loud message to a bus for the Joe Biden-Kamala Harris campaign. The bus was en route to Austin, where an event was to be held to drum up support for Democrat presidential candidate Joe Biden.

President Trump on Saturday, tweeted a video of the scene in Austin, saying “I Love Texas.”

Another video posted to Twitter on Halloween, showed a reported “96 miles” of Trump supporters in Arizona.

(Related: Candace Owens Rips AOC Over Her House Floor Speech: “It’s Hard Not To Laugh At This Rehearsed Buffoonery”