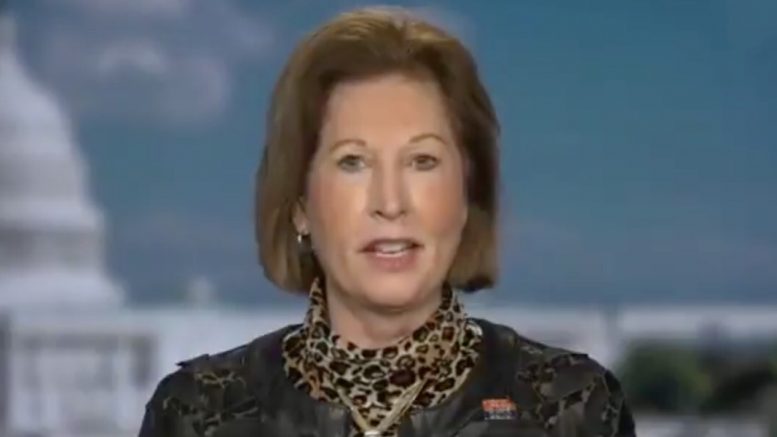 Powell, who is helping Trump’s legal effort in the 2020 election, also said that people with links to top Democrats are using Dominion Voting Systems to commit “fraud” on elections. She did not present any evidence to support her charges, though she told Fox Business’ Lou Dobbs on Friday, “We are putting it into materials that we will file in federal court. And we need to seek relief in multiple states to enjoin the certification of any election results.”

“There has been a massive and coordinated effort to steal this election from we the people of the United States of America, to delegitimize and destroy votes for Donald Trump, to manufacture votes for Joe Biden,” Sidney Powell told Maria Bartiromo. “They have done it in every way imaginable, from having dead people vote in massive numbers to absolutely, fraudulently creating ballots that exist only voting for Biden”

“We’ve identified at least 450,000 ballots in the key states that miraculously only have a mark for Joe Biden on them and no other candidate,” she announced.

“If you look at Florida, where things were done right, you can see that that’s how the rest of the country should have gone, but they also used an algorithm to calculate the votes they need to flip and they used computers to flip those votes from Trump to Biden and from other Republican candidates to their competitors also. I think [GA Rep.] Doug Collins had the race stolen from him. I think [MI Republican Senate candidate] John James had his race stolen from him. It wasn’t just President Trump, there were many people effected by this,” Powell suggested.

“We have got got to fight tooth and nail in federal court to expose this abject fraud and the conspiracy behind it and get a recount in every place that is needed, which is frankly, most of the country,” General Flynn’s attorney said. Continued Below

The software had reportedly caused a significant number of votes to be allotted to Biden in a county that has for years been reliably red. In the presumed final count, Biden had originally led in the county by roughly 3,000 votes. Revised totals show that Trump won the county by around 2,500, per Just the News.

Powell told Bartiromo “they are seeing all kinds of fraud”, adding, “We are getting an affidavit from a postal worker now … who talks about having to backdate ballots. No ballots received after the polls closed on voting day should even be counted. We’ve got multiple states that didn’t even follow the rules of their own legislature. That’s a federal constitutional issue. Video Below

“There are least three major federal issues here that will require the Supreme Court to resolve this case. And when the votes are really audited and the real votes are counted, Trump will win. He is the president, and he is in charge of this country,” Powell added.

(Related: Sidney Powell On A Reported Election-Software Glitch: “It’s Got To Be Investigated Probably By The President’s Most Trusted Military Intelligence Officials”)