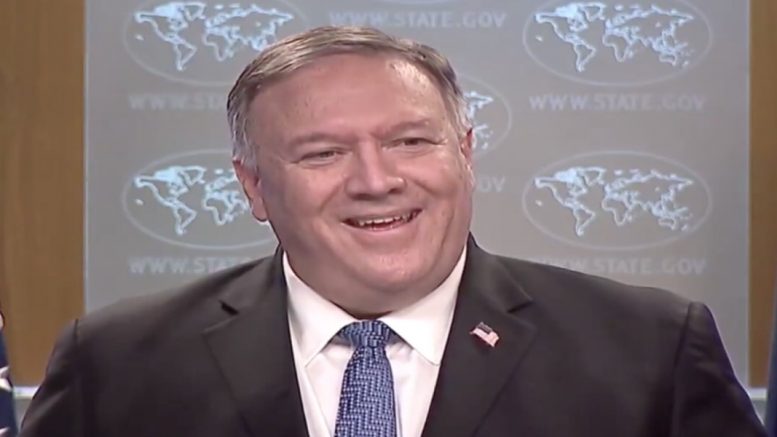 During a briefing at the State Department’s headquarters Tuesday, Secretary of State Mike Pompeo was asked by a reporter whether officials there were “preparing to engage” with Joe Biden’s transition team.

Pompeo, however, predicted that President Donald Trump would emerge as this year’s winner in the presidential election.

“There will be a smooth transition to a second Trump administration,” Mike Pompeo said with a confident smile. “We’re ready. The world is watching what’s taking place here.”

“We’ll gonna count all of the votes. When the process is complete, there will be electors selected– there’s a process, the Constitution lays it out pretty clearly,” the secretary of state said.

“The world should have every confidence that the transition necessary to make sure that the State Department is functional today, successful today, and successful with the president who’s in office on January 20, a minute after noon, will also be successful,” he continued.

“I went through a transition on the front, and I’ve been on the other side of this. I’m very confident that we will do all the things that are necessary to make sure that the government, the United States government, will continue to perform it’s national security function as we go forward,” Pompeo added. Continued Below

Pompeo was also asked if he agreed with allegations by Trump and his supporters about widespread voter fraud, which Pompeo noted that he’d been “getting calls from all across the world”, adding, “We must count every legal vote.”

“We must make sure that any vote that wasn’t lawful not be counted that dilutes your vote. If it was done improperly, we gotta get that right and when we get it right, we’ll get it right. We’re in good shape,” he said.

Trump has declined to concede since Biden declared victory Saturday following projections by major news organizations and he’s ignored a request by the Center for Presidential Transition to begin turning over the reins of power, the New York Post reported. Video Below

“There will be a smooth transition to a second Trump administration.”pic.twitter.com/7RDAnCEiw2

(Related: Iran’s Supreme Leader Blasts America’s Election System, Pompeo Fires Back: “We Welcome The Day When The Iranian People Get Their Wish”)