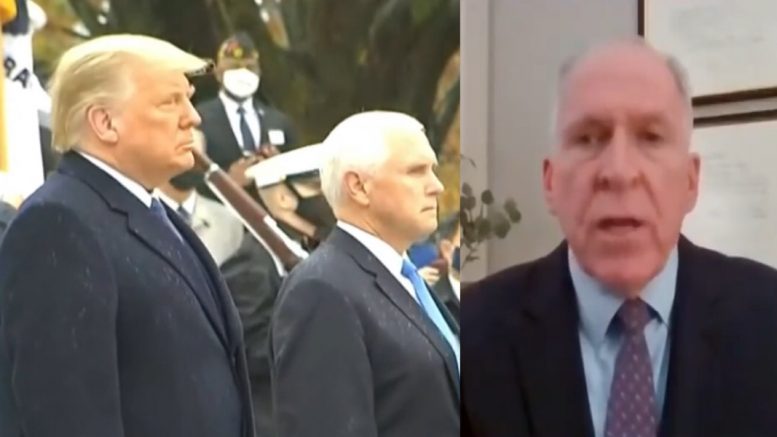 During a Monday interview on CNN, former CIA Director John Brennan said he is “very concerned” over what President Trump “might do” in “his remaining 70 days in office” and called for Vice President Mike Pence and other officials in the cabinet to “seriously consider” removing the Commander in Chief from office by invoking the 25th Amendment.

Brennan’s remarks came after President Trump announced on Twitter Monday that he has fired Defense Secretary Mark Esper and will replace him with acting secretary, Christopher C. Miller.

“I am pleased to announce that Christopher C. Miller, the highly respected Director of the National Counterterrorism Center (unanimously confirmed by the Senate), will be Acting Secretary of Defense, effective immediately,” the president said in a tweet. “Chris will do a GREAT job! Mark Esper has been terminated. I would like to thank him for his service.”

“70 days, you can do a lot of damage in 70 day,” Brennan told CNN host Chris Cuomo, referring to President Trump. “He still is the President of the United States.

“And is he going to carry out these vendettas against other individuals, as you pointed out Chris Wray or Gina Haspel or others? It is clear Donald Trump is trying to exercise the power because he can, and he is going to settle scores,” Brennan claimed. “But I am very concerned what he might do in his remaining 70 days in office. Is he going to take some kind of military action? Is he going to release some type of information that could in fact, threaten our national security interests?”

“So I think people need to be looking very carefully at what he is doing and unfortunately, Republicans in Congress continued to give Donald Trump a pass,” he asserted. Continued Below

Asked what can be done to stop President Trump from doing anything he wants to do in the next 70 days, Brennan declared, “If Vice President [Mike] Pence and the cabinet had an ounce of fortitude and spine and patriotism, I think they would seriously consider invoking the 25th Amendment, and you know, pushing Donald Trump out”.

Brennan clarified, “Because he is just very unpredictable now. He’s like a cornered cat, tiger, and he’s going to lash out. And the fact again, that he has the powers of the presidency in his hands, is quite worrisome.”

“The members of Congress, the leadership of the Republican party, really needs to send clear signals to Donald Trump– that if he goes, if he continues to go along this path, they are going to put up roadblocks,” he said. Video Below

Former CIA Director John Brennan says that "if Vice President Pence and the cabinet had an ounce of fortitude and spine and patriotism, I think they would seriously consider invoking the 25th amendment."

"He's like a cornered cat… and he is going to lash out." pic.twitter.com/BkCTw7zH2d

Last month, Director of National Intelligence John Ratcliffe declassified documents that revealed former CIA Director John Brennan briefed former President Barack Hussein Obama on Hillary Clinton’s purported “plan” to tie then-candidate Donald Trump to Russia as “a means of distracting the public from her use of a private email server” ahead of the 2016 presidential election.

Asked about the notes and what he makes of DNI Ratcliffe releasing them, Brennan claimed in part, during a CNN interview: “Well, John Ratcliffe is anything but an intelligence professional. He is appalling in his selective declassification of information that is clearly designed to advance the political interests of Donald Trump and Republicans who are aligned with him.”

(Related: McEnany: “Brennan Probably Has The Most To Answer”… He Said The Dossier “Played No Part Of The Role In Opening Russia Probe”)